Following our earlier multidimensional poverty map based on 2013 data, we present here an update based on Quality of Life Survey IV (2015/16) survey data. Poverty is often measured in terms of income. For example, many studies make use of a ‘poverty line’ in which those who earn less than $2.00 a day are defined as poor. An alternative approach is to recognise that poverty is multidimensional and can be measured across a variety of indicators such as housing, water, sanitation, energy, ownership of communication assets, food, employment and education. In terms of this approach, poverty is measured not according to an income threshold but according to the number of indicators in which a household* is deprived (known as the ‘headcount ratio’).

There is a dummy example at the end of this write-up to illustrate how the calculations are made. 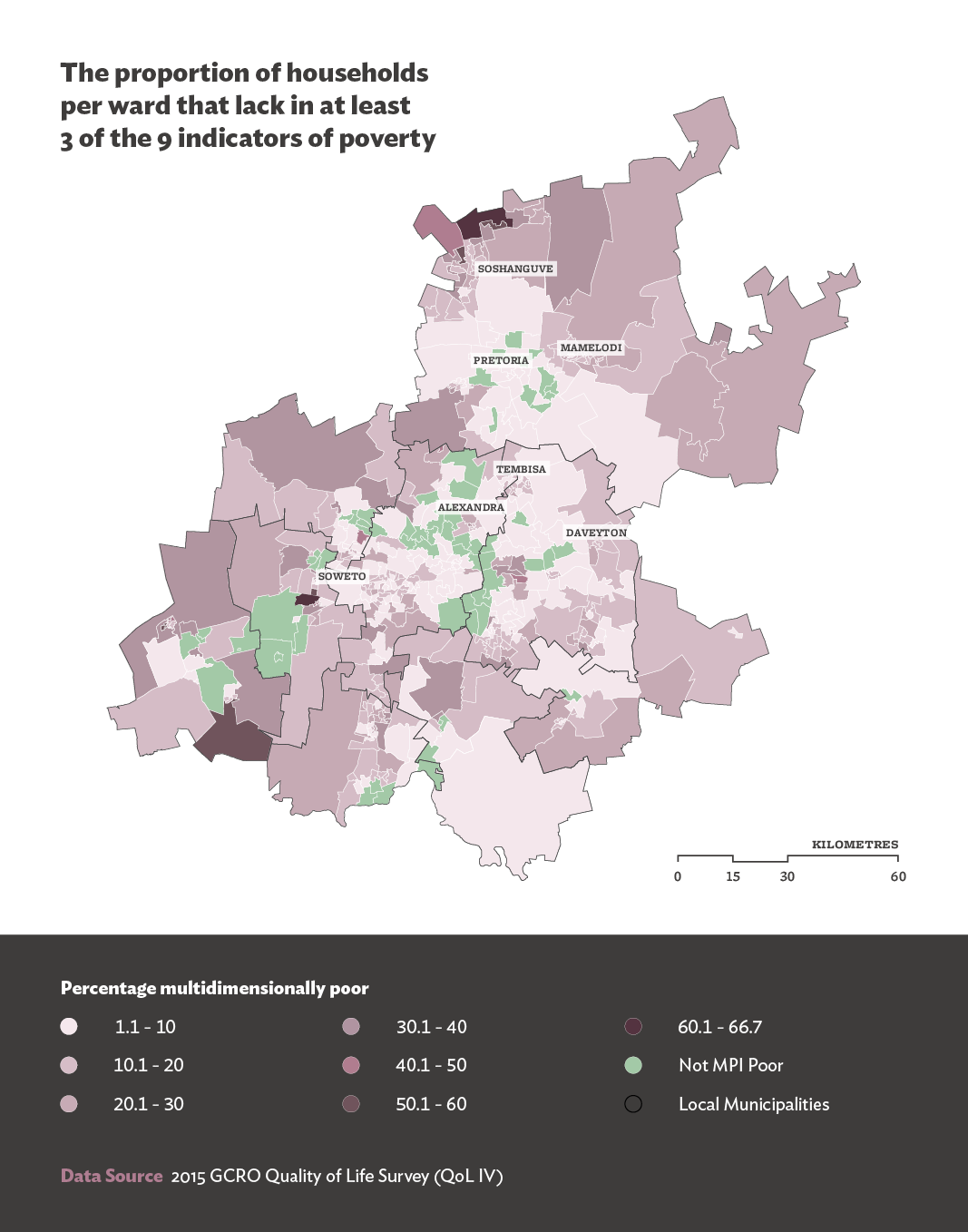 For those households indentified as poor it is also necessary to assess just how poor they are, that is, the depth or intensity of their poverty. Intensity is measured by asking, of those respondents who are multidimensionally poor, what was the average percentage of indicators that they were deprived on. The higher the percentage, the deeper the level of poverty for those who are poor, as illustrated in the visualisation at the end of this write-up.

The analysis of this measure gave a rather striking result for Gauteng, as shown in Map 2. While a headcount ratio picture alone suggests that poverty is concentrated on the edges of the city-region, an intensity analysis indicates that there are a number of wards in the core where poverty is much deeper than that in wards on the outskirts. This most likely has to with high levels of informality in areas such as Alexandra, Diepsloot and Daveyton. Informality in housing poses challenges in terms of accessing other amenities such as piped water, electricity and flush toilets. 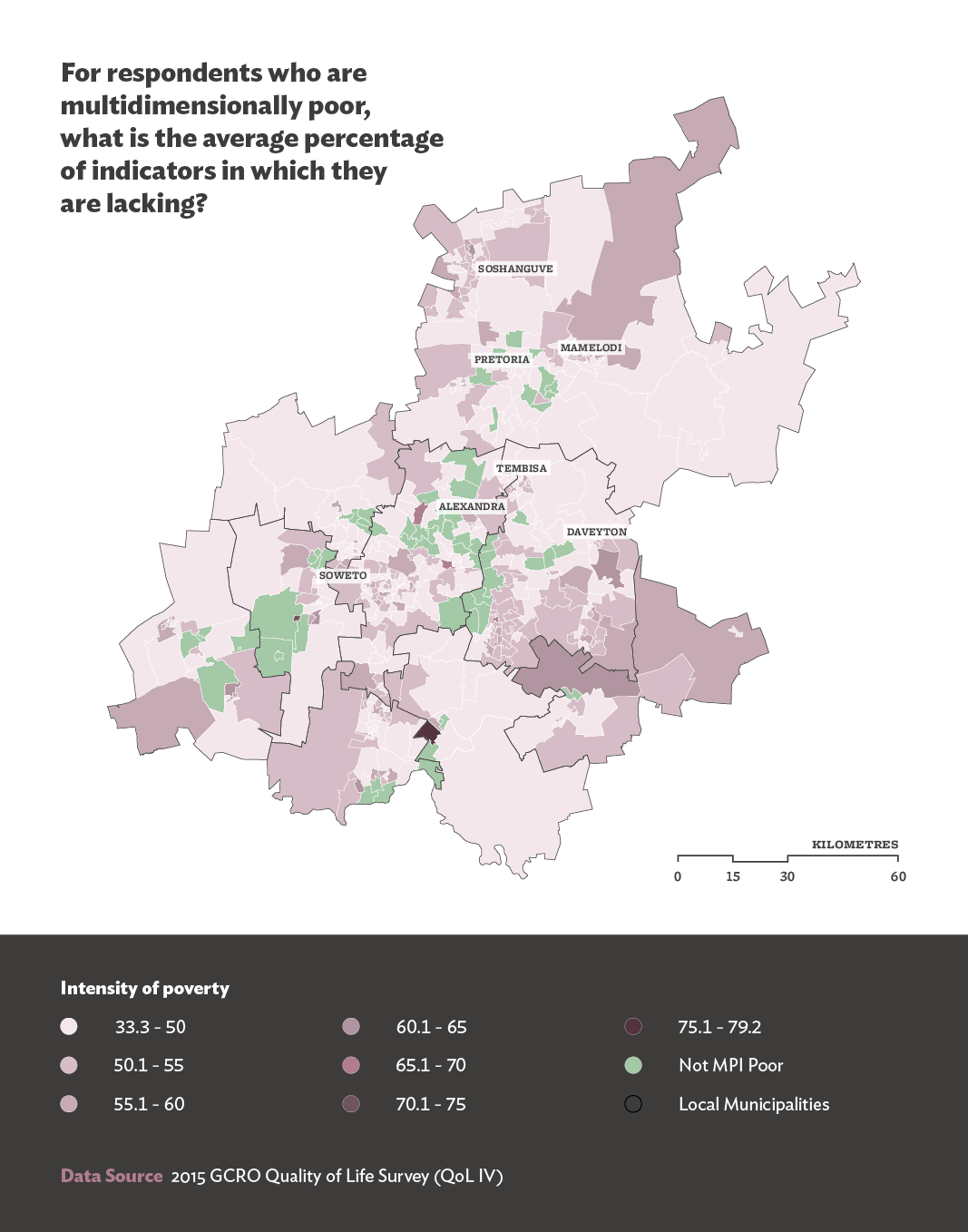 That said, when an overall Multidimensional Poverty Index (MPI) is computed by combining headcount and intensity (the proportion of households that are lacking in three or more dimensions is multiplied by the average percentage of indicators in which poor households are lacking), outlying wards do feature as relatively poor compared to wards located in the interior of the province. This is essentially because of the larger proportions of households that are multidimensionally poor in these areas. 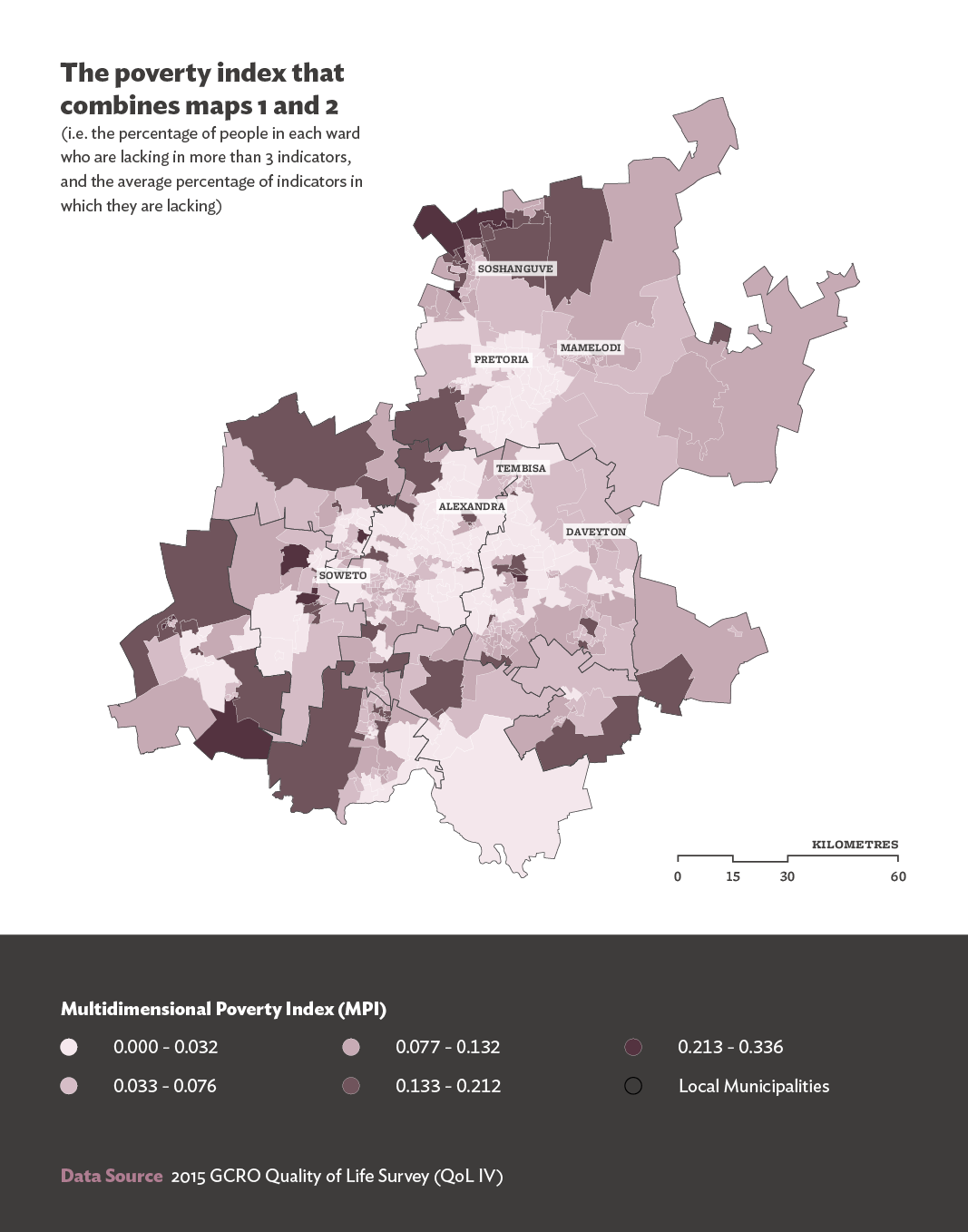 A comparison of multidimensional poverty calculations for QoL III 2013/14 data and QoL IV 2015/16 data suggests that poverty levels in the GCR have worsened since 2013. The headcount ratio and the intensity of poverty rose by 0.3 and 1.0 percentage points respectively, while the overall multidimensional poverty index rose by 0.003 percentage points. Several municipalities such as Johannesburg, Lesedi, Merafong, Mogale City and Tshwane experienced an increase in the proportion of households that are multidimensionally poor between 2013 and 2015.

Furthermore, we can measure intensity of poverty. This assesses the number of indicators in which respondents are lacking (in our case, Households 3 to 8). Intensity is defined as the average level of poverty for those households that are poor. Household 8 is the poorest since it is lacking in 8 of the 9 indicators. When all the multidimensionally poor households (3 to 8), are taken together the average proportion of the indicators in which they lack is 61,1%. This figure defines the intensity of poverty for this ward.

A Multidimensional Poverty Index (MPI) is calculated by multiplying the two percentages, for Headcount and Intensity, together. It gives a combined view of both the breadth and depth of poverty in an area. 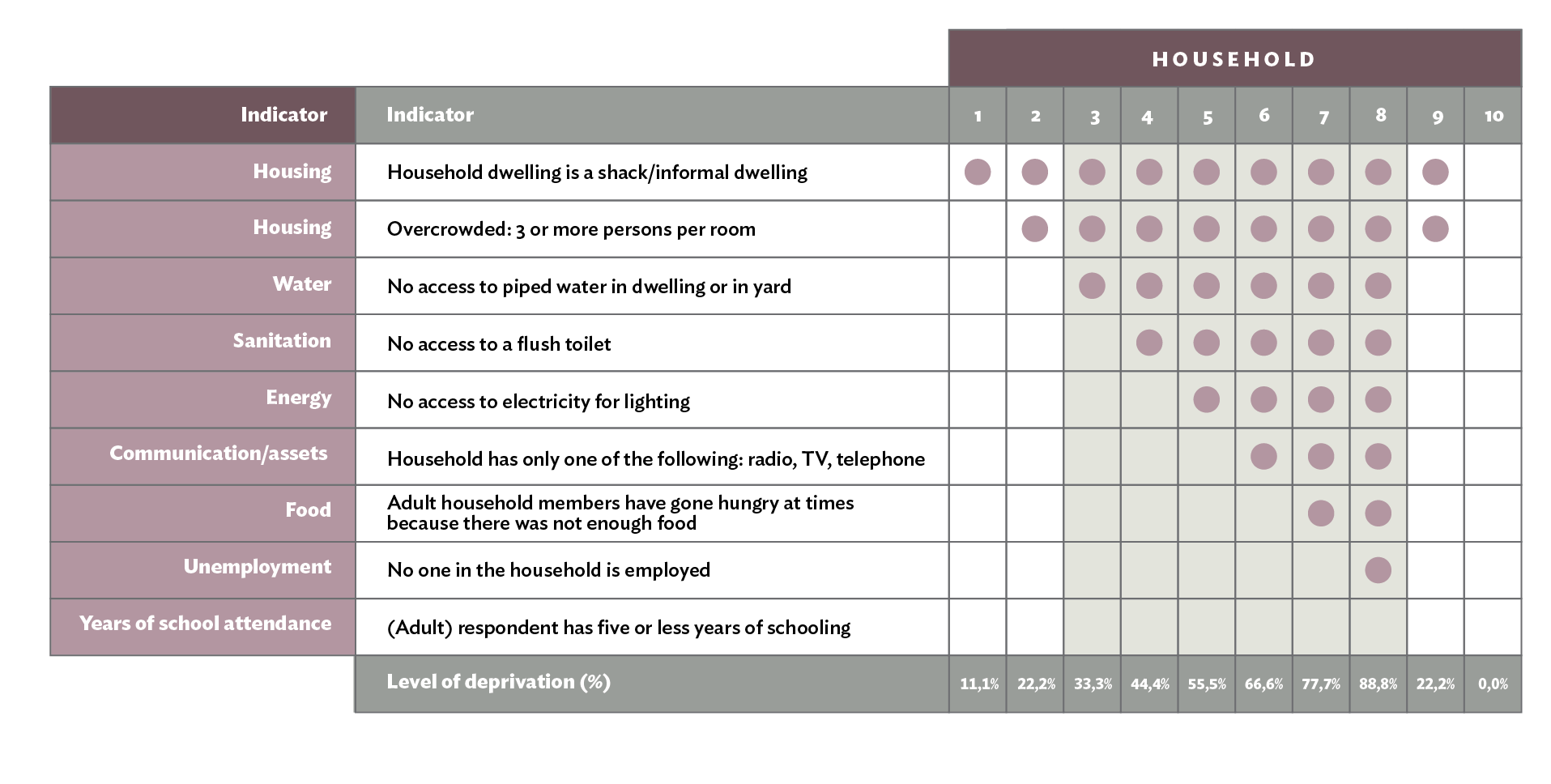 Link to project: Understanding poverty in the GCR
Link to report: Poverty and inequality in the Gauteng City-Region

* Although the Quality of Life Survey data reflects the responses of individual respondents, these respondents speak to the condition of their households on many of the indicators, especially with regard to housing and service deficits. As a shorthand we therefore refer to households in this analysis.