The need for a multidimensional approach to analysing poverty is widely shared. As Amartya Sen rightly observed, “...human lives are battered and diminished in all kinds of different ways, and the first task, seen in this perspective, is to acknowledge that deprivations of very different kinds have to be accommodated within a general overarching framework” (Sen, 2000, p. 19). Several attempts to develop such a framework have been made over the years including, Anand and Sen, 1997; Bourguignon and Chakravarty, 2003; Atkinson, 2003; Kakwani and Silber, 2008a; Kakwani and Silber, 2008b; Thorbecke, 2008, and Alkire and Foster, 2011. The conception of poverty as multidimensional also forms the basis for the Human Development Index (HDI) as well as the Millennium Development Goals (MDGs). In South Africa, Statistics South Africa (Stats SA) developed a multidimensional poverty index for South Africa (SAMPI) using data from the 2001 and 2011 Censuses. In the current map of the month, we develop a multidimensional poverty index for Gauteng (GMPI) using the 2013 GCRO Quality of Life (QoL) survey data. QoL is biennial survey and hence it permits us to track multidimensional poverty over shorter time spans. 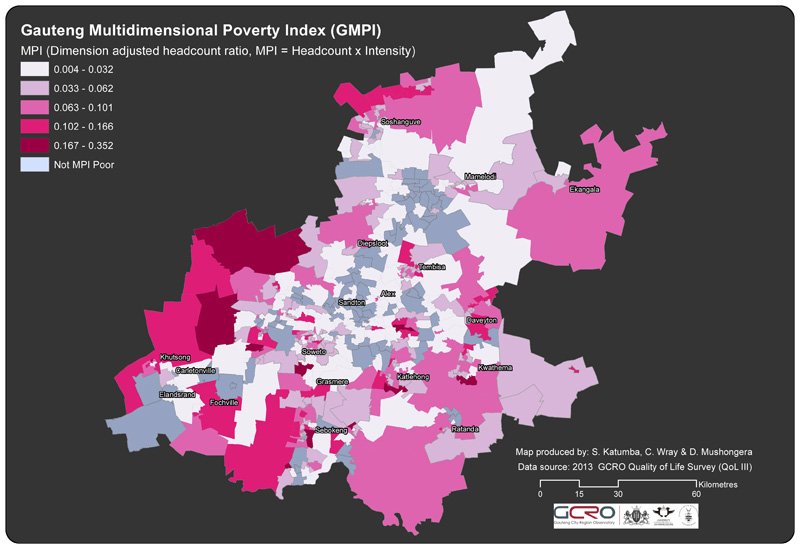 Using the Alkire-Foster Method (Alkire and Foster, 2011), we generated three measures of multidimensional poverty, which are:

A set of 11 indicators spanning across 4 dimensions was used as the basis for calculating these measures. Table 1 shows the different dimensions, indicators and the cut-offs.

A household is considered multidimensionally poor (MPI poor) if the weighted score of indicators that are lower than desired outcome (cut-off) is at least 33.3%. The three measures were mapped by ward as shown in Maps 1-3. 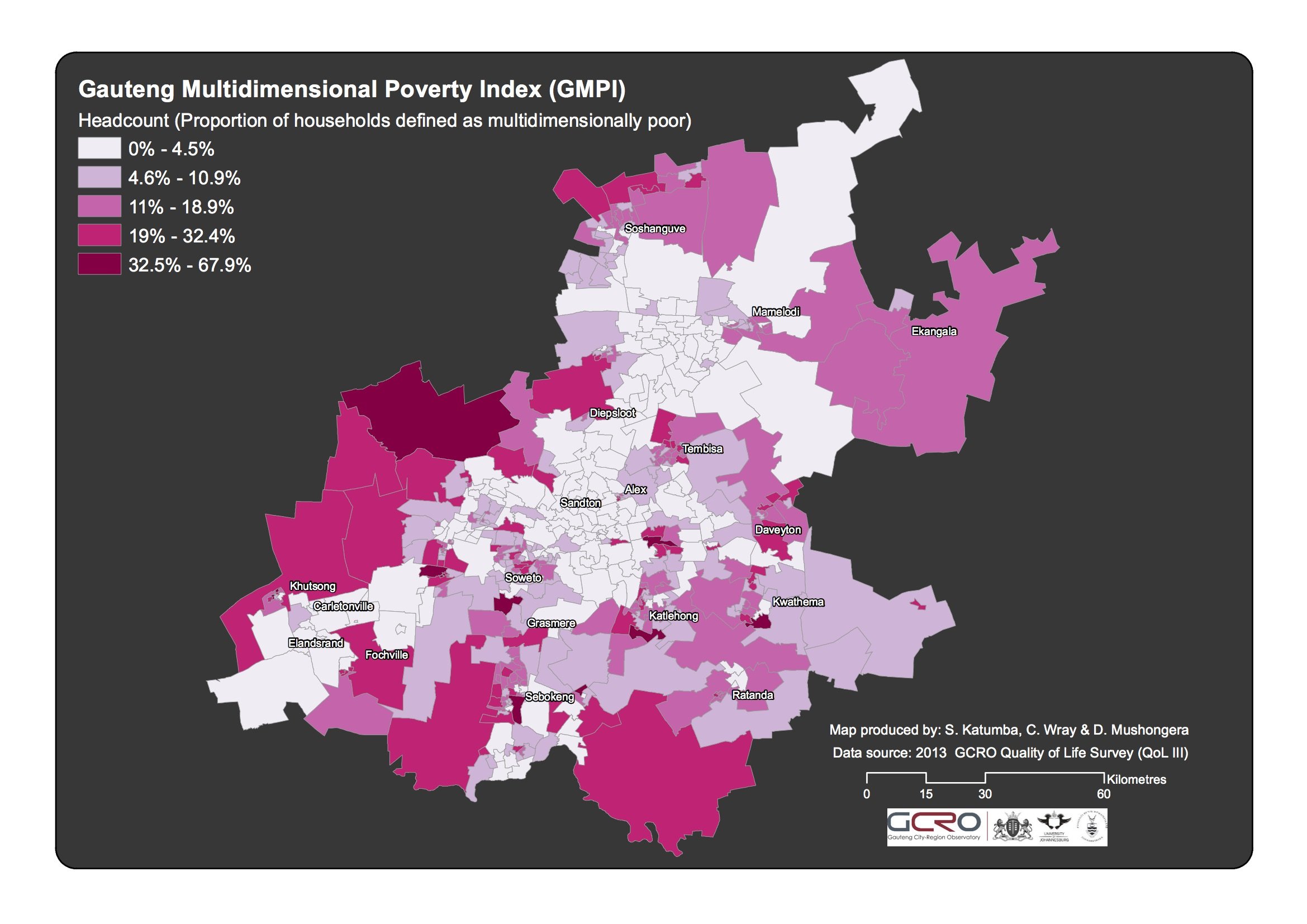 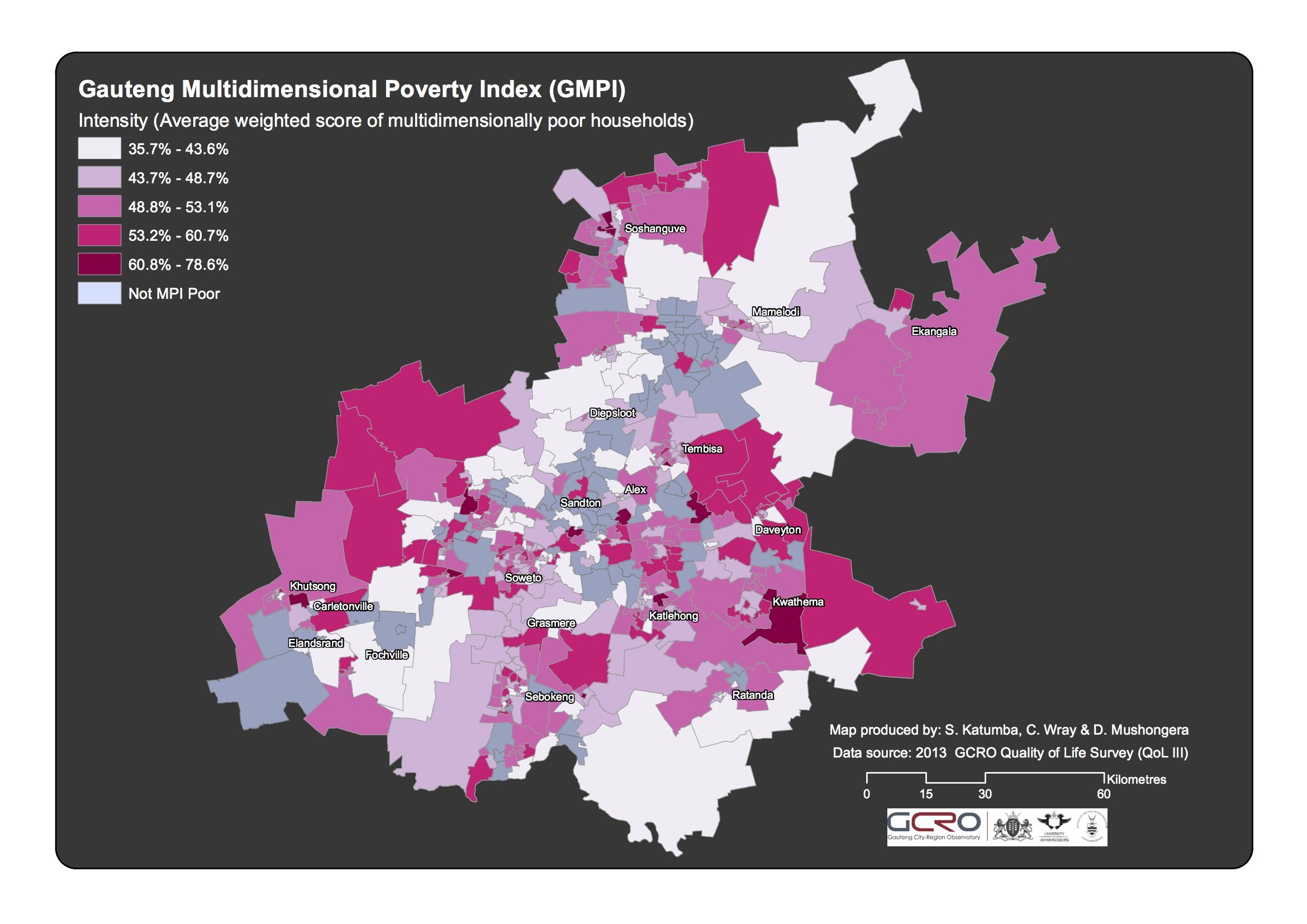 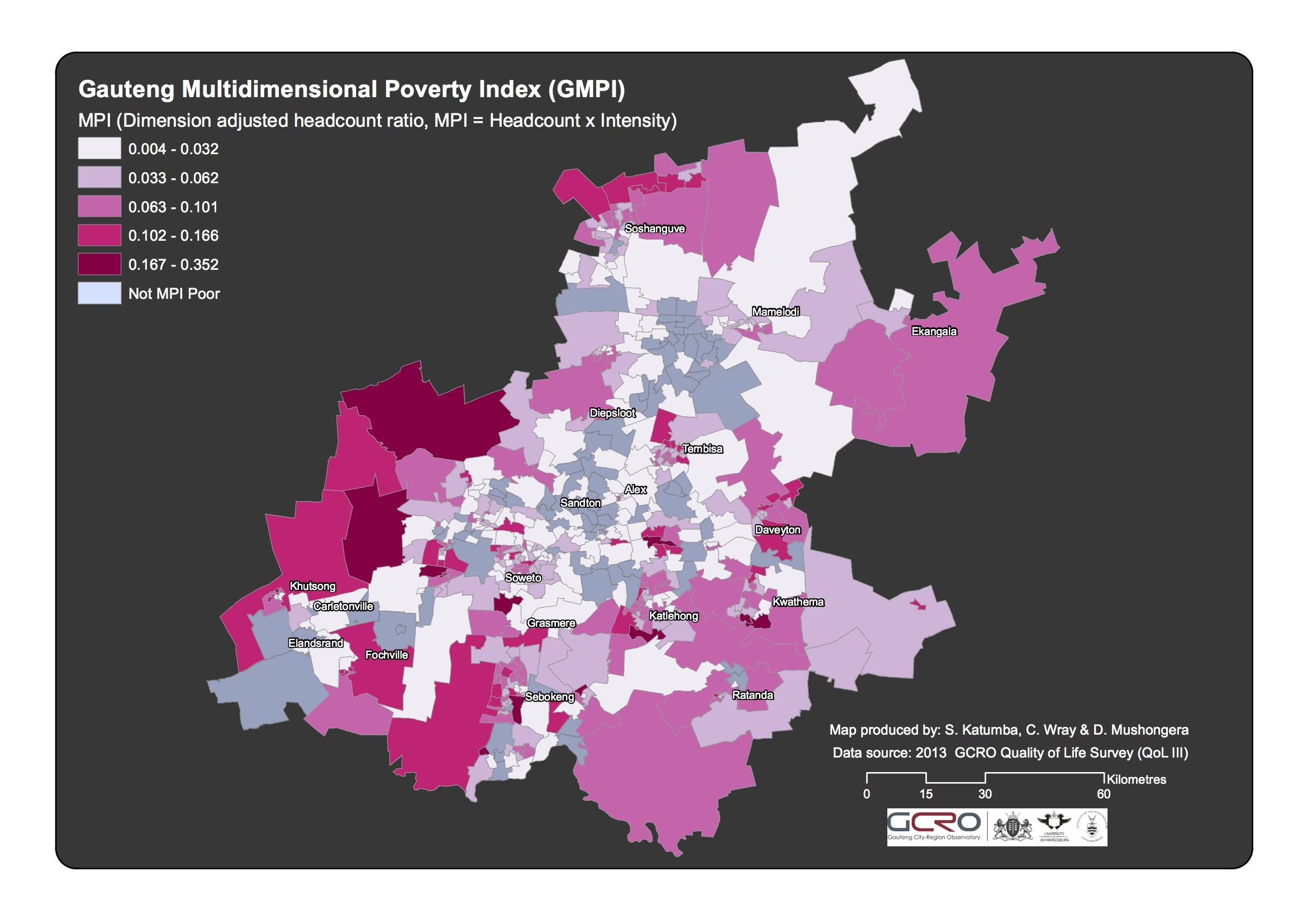 The analysis shows that the MPI headcount (H) ranges between 0 and 68%. This means that, in Gauteng's poorest ward, 68% of the households are MPI poor. 18% of Gauteng wards do not have MPI poor households (90 of the 509 wards in Gauteng). This means that all households, in these wards, meet the required minimum level as per the cut-off, hence are well off. Most of the non-MPI poor wards are located at the centre of the province (in the metros). However, there are a few outliers in the south and south western parts of the province as well as parts of Soweto.

The intensity (I) ranges between 36 and 79%, indicating that, where multidimensional poverty exists, the degree is high. As shown in the maps, multidimensional poverty tends to be highest in areas of low economic activity and located on the edges of the province. However, pockets of multidimensional poverty do prevail in the metros as well. The analysis also revealed a strong correlation between MPI and income. While the indigency policy may help cushion the poor from extreme poverty, evidence from the survey shows that many deserving households are not on the indigent register. For example, in Gauteng, 44% indicated that they receive social grants yet only 0.9% of these were on the indigency register. This has the effect of limiting households’ access to basic service provided under municipal indigency policies.

This analysis revealed that multidimensional poverty does exist in Gauteng, and is quite high in particular areas as identified in the maps – but is by no means as widespread as some may expect. Local government has the task of devising policies that ensure that residents have access to at least the required minimum level of services. There is also a need to stimulate economic development (hence increasing employment opportunities) in outlying areas as there is clear evidence that these are lagging behind. This analysis also underscores the value of undertaking small area analysis of poverty. Without drilling down to ward level it is not easy for municipalities to identify pockets of poverty that exist in their areas.