The March 2020 GCRO Map of the Month used Quality of Life Survey V (2017/18) data to map potential vulnerability to COVID-19. The mapping was based on two indexes to “aid understanding of the localised risk factors that might contribute to the spread of COVID-19, and might amplify its health and socio-economic impact in Gauteng communities” (De Kadt et al. 2020). The first index considered factors that might make it more difficult for some communities to maintain basic preventative hygiene and social distancing. The second looked at risk factors that might either amplify the health impacts of COVID-19 where there might be outbreaks, or exacerbate the socio-economic impacts of the pandemic, especially in the context of government lockdowns. The Map of the Month argued:

Whilst government has thus far focused on critical measures to prevent the spread of COVID-19 in the immediate term, its responses will need to evolve over time to consider how the pandemic will have significant effects on the economy and livelihoods .... Once again, these impacts are likely to be felt unevenly. Poorer communities are likely to bear the brunt of the dire health and socio-economic consequences as COVID-19 spreads. In addition, with various shutdown measures already in place, they will be the most vulnerable to these dramatic changes in the patterns of social functioning, and the downturn in economic activity that will inevitably result. (De Kadt et al. 2020)

Marking two years since this analysis was published, this April 2022 Map of the Month looks at available data from the 6th iteration of the Quality of Life Survey (QoL 2020/21) to reflect again on how Gauteng communities have been unevenly affected by the dire socio-economic crisis that has followed the pandemic.

A number of questions were introduced into the Quality of Life Survey 6 (2020/21) questionnaire to discern some of the economic effects of COVID-19 related disruptions. The survey asked whether the respondent had, since March 2020, seen their salary and working hours reduced, or had lost a job. One-fifth (19%) of all respondents said that their salary and working hours had been reduced. Discounting those who responded that the question was not applicable to them, an extraordinary one-third (30%) of applicable respondents saw cuts to salary and working hours. By contrast, one in ten (11%) of all respondents said that they had lost a job since March 2020. Discounting those who said the question did not apply to them since they did not previously have a job, 18% of applicable respondents lost a job at some point between March 2020 and when fieldwork was concluded at the end of May 2021.

We have shown elsewhere that there was considerable variation in who was impacted by job losses or by cuts to salary and working hours. In relative terms, a higher proportion of white and better educated respondents reported reduced salary and working hours, and a higher proportion of African and more poorly educated respondents lost jobs. This suggests that poorer and more vulnerable Gauteng residents bore the larger brunt of the economic downturn – better off respondents were certainly affected, but suffered less overall in that they were relatively more shielded from jobs losses (Maree et al., 2021).

This Map of the Month builds on this analysis by representing it spatially for the first time. Our Maps of the Month often plot data at a ward level, but the QoL 6 (2020/21) sample was smaller than in previous years, and although there were interviews in every ward in Gauteng there are some limits to statistical confidence when data is mapped at this small scale. This Map of the Month represents the data at a mesozone scale (CSIR, 2018). The mesozone layer was developed by the Council for Scientific and Industrial Research (CSIR) as a matrix of polygons, every one roughly 50km2 in size, covering the entire country. The scale of each mesozone does mean that some level of detail is lost. However, aligned to administrative boundaries and natural features, mesozones enable spatial comparison in a way that is sometimes more effective than spatial layers with disproportionately sized polygons, such as that for electoral wards. There are 242 mesozones covering Gauteng, about half of the number of electoral wards. We have excluded mesozones with 10 or fewer QoL respondents from the mapping. The average number of QoL respondents per mesozone is 56. Most mesozones in denser parts of the province have 100 or more QoL respondents, with numbers in those covering, say, Soweto or Alexandra rising to around 500. 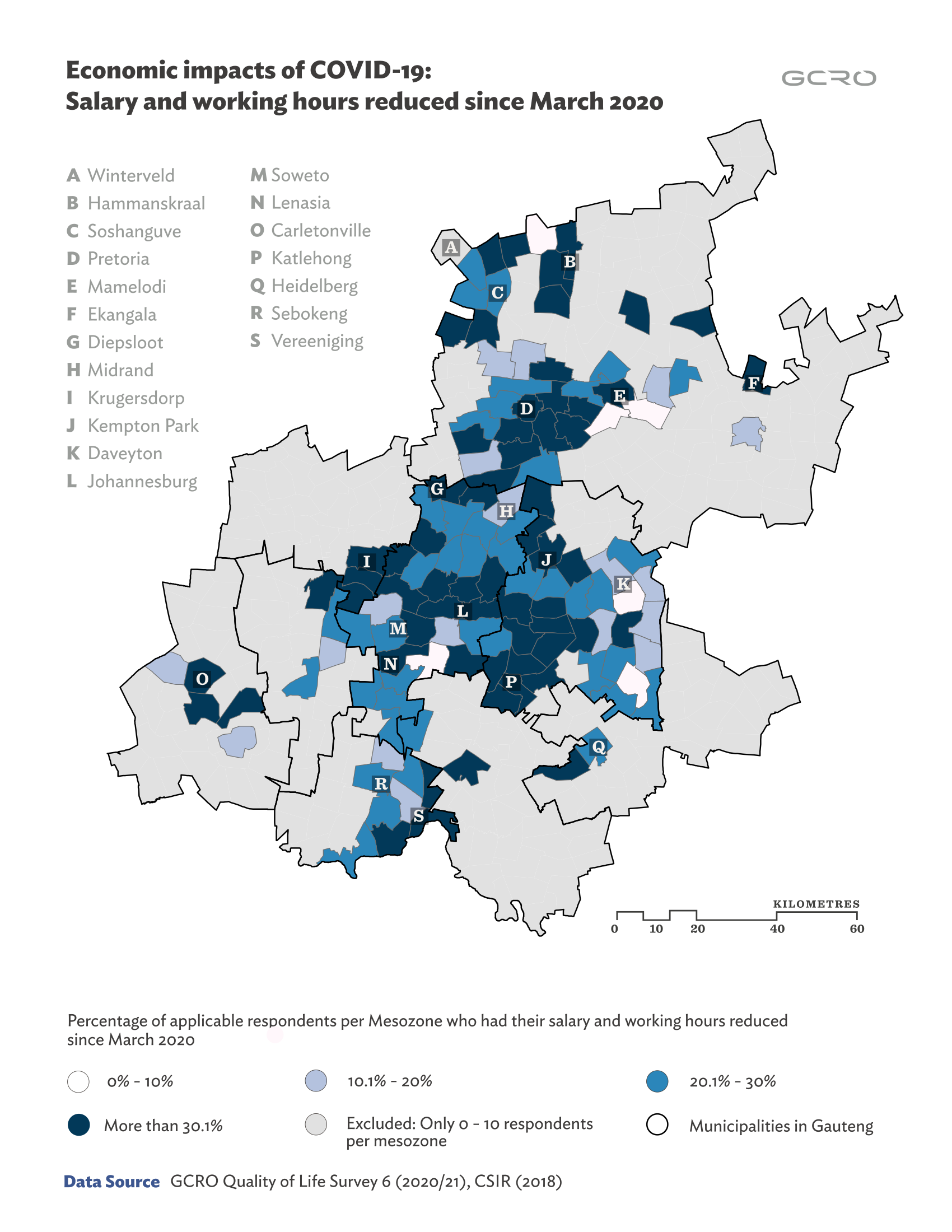 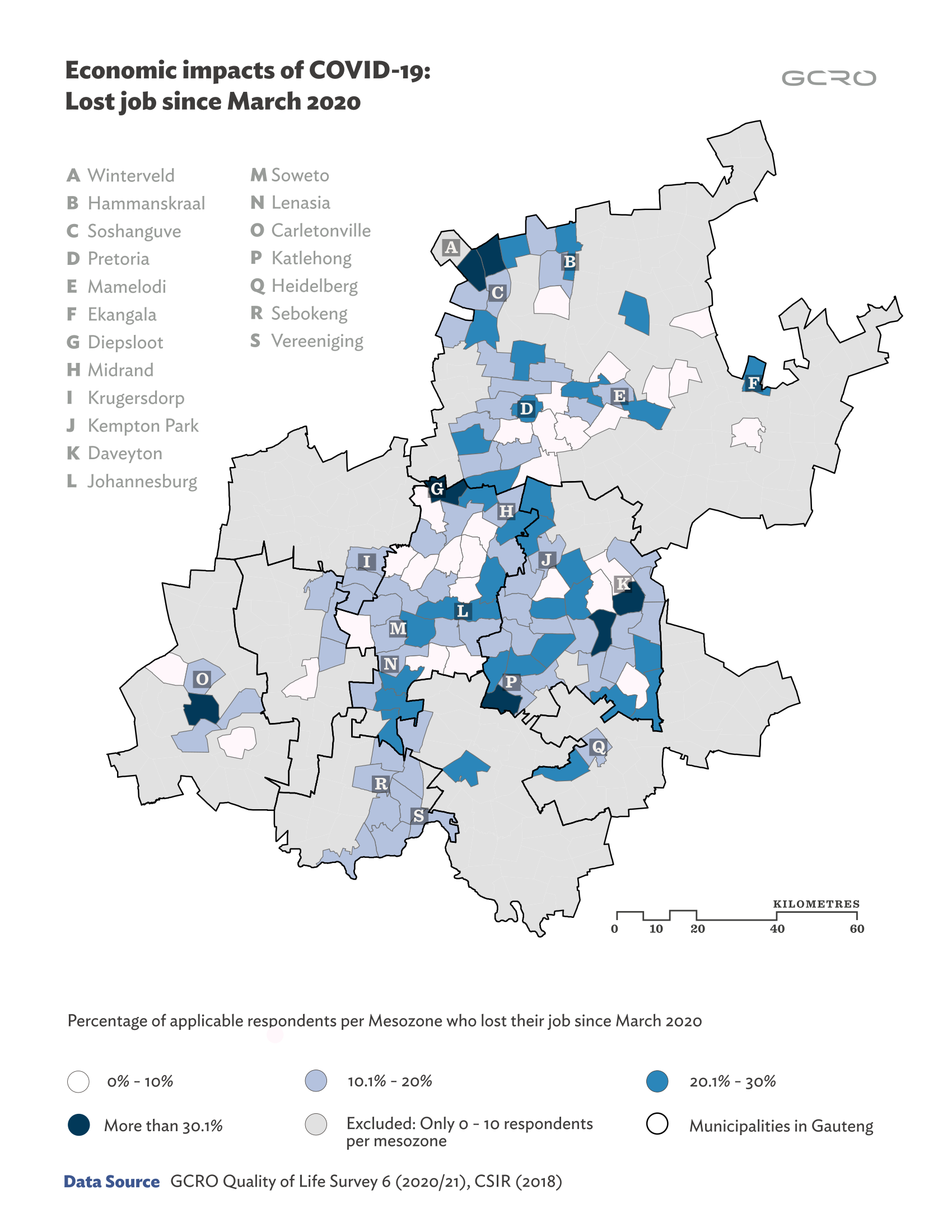 Reduced salaries and working hours was experienced extensively across the Gauteng City-Region. Large swathes of the province saw more than 30% of respondents reporting wage and time cuts. Many other mesozones were in the 20-30% range. Only a few areas had less than 10%. By contrast Map 2 shows a more concentrated spatial pattern for job losses, with only a few areas having more than 30% of respondents reporting that they had lost jobs, and large parts of the province less than the average of 11%.

Map 1 indicates that some of the areas with the highest reported levels of lost pay and working hours were in the central and northern parts of Johannesburg, around Kempton Park and central Ekurhuleni, around Krugersdorp/Roodepoort and in central Pretoria and Centurion (the area just south of the Pretoria marker on the maps). These are some of the wealthier parts of the Gauteng City-Region. Interestingly, these same areas were among those with the lowest reported percentage of jobs losses. By way of example, the mesozones around Centurion all have reported job losses in the range of 0-10%, but reduced salary and working hours in the +30% range. Similarly, the mesozones covering the northern suburbs of Johannesburg all have less than 10% of respondents reporting job losses, but 20-30% of respondents saying their salary and working hours were reduced.

The reverse is true for some of the more peripheral and poorer parts of the province. Mesozones with the lowest levels of reduced work and pay include those in the eastern extent of Ekurhuleni around Daveyton, as well as in parts of Mamelodi, Soweto and Sebokeng. These same areas saw significantly above average percentages of jobs losses.

The maps do show some areas that were severely impacted by both reduced salaries and working hours, as well as by high employment losses. Here Carletonville, Diepsloot, Katlehong, the Soshanguve / Winterveld area, Hammanskraal, Ekangala, Heidelberg / Ratanda, and the inner city areas of Johannesburg and Pretoria all stand out. Most of these were areas identified as being particularly vulnerable on socio-economic risk factors in the March 2020 maps.

When these two maps are seen side by side they show that while the direct economic impacts of the pandemic have been widespread and felt across the Gauteng City-Region, the most severe effects have been experienced in the most vulnerable communities. The contrasting patterns presented confirm our earlier analysis that “white respondents and those from wealthier households have seen the greater impact of reduced working hours and salaries. But this is a lesser pain than job losses and business closures, where black Africans and those on lower rungs of the socio-economic ladder seem to have suffered far more” (Maree et al., 2021)

A more detailed explanation of the reasons behind these patterns is beyond the scope of this Map of the Month. However, some explanation is likely to be found in where people holding employment in certain sectors and occupations tend to live. For example it is likely that those with work in technical, professional and managerial positions, and in tertiary-sector finance, business services and government jobs, were more easily able to shift to an online work environment over the pandemic. Many may well have seen reduced salaries and working hours, but they did not lose their jobs. Respondents in these employment categories would typically concentrate in places such as the northern suburbs of Johannesburg or Centurion. By contrast areas with a predominance of people employed in lower skilled positions in manufacturing, retail or domestic service may have been relatively more affected by jobs losses.

Responding to the COVID-19 pandemic in Gauteng