As we come to grips with the effects of the COVID-19 pandemic, various urban forms and functions are being examined critically by urban scholars and policy makers. One dimension of the urban form that is being fiercely debated is population density. Government officials and scholars across the world, including South Africa, are re-examining the benefits and drawbacks of dense urban settlements in the context of COVID-19, and particularly how cities will be shaped after the pandemic. In the April 2020 Map of the Month, we showed how half of Gauteng’s population live on about 2 % of the land in the province. This month we provide another representation of population density – this time in 3D – and we use this representation to delve deeper into an analysis of population density in the context of the COVID-19 pandemic. This 3D density representation also serves as an update of the August 2013 Map of the Month which is based on 2011 census data.

The April 2020 Map of the Month’s representation of population density highlighted the uneven “horizontal” distribution of residents in Gauteng. Map 1, below, highlights the uneven “vertical” distribution of residents in Gauteng. The map draws on modelled population estimates, which the GCRO sourced from GeoTerraImage, and is represented here as the population per square kilometre in Gauteng.1 The densest square kilometre (the highest peak in Map 1) is clearly in Hillbrow (with more than 48 000 people), followed by the peaks in Diepsloot (between 24 000 and 48 000 people) and then peaks in various parts of townships around Gauteng (for example Soweto, Tembisa and Mamelodi). 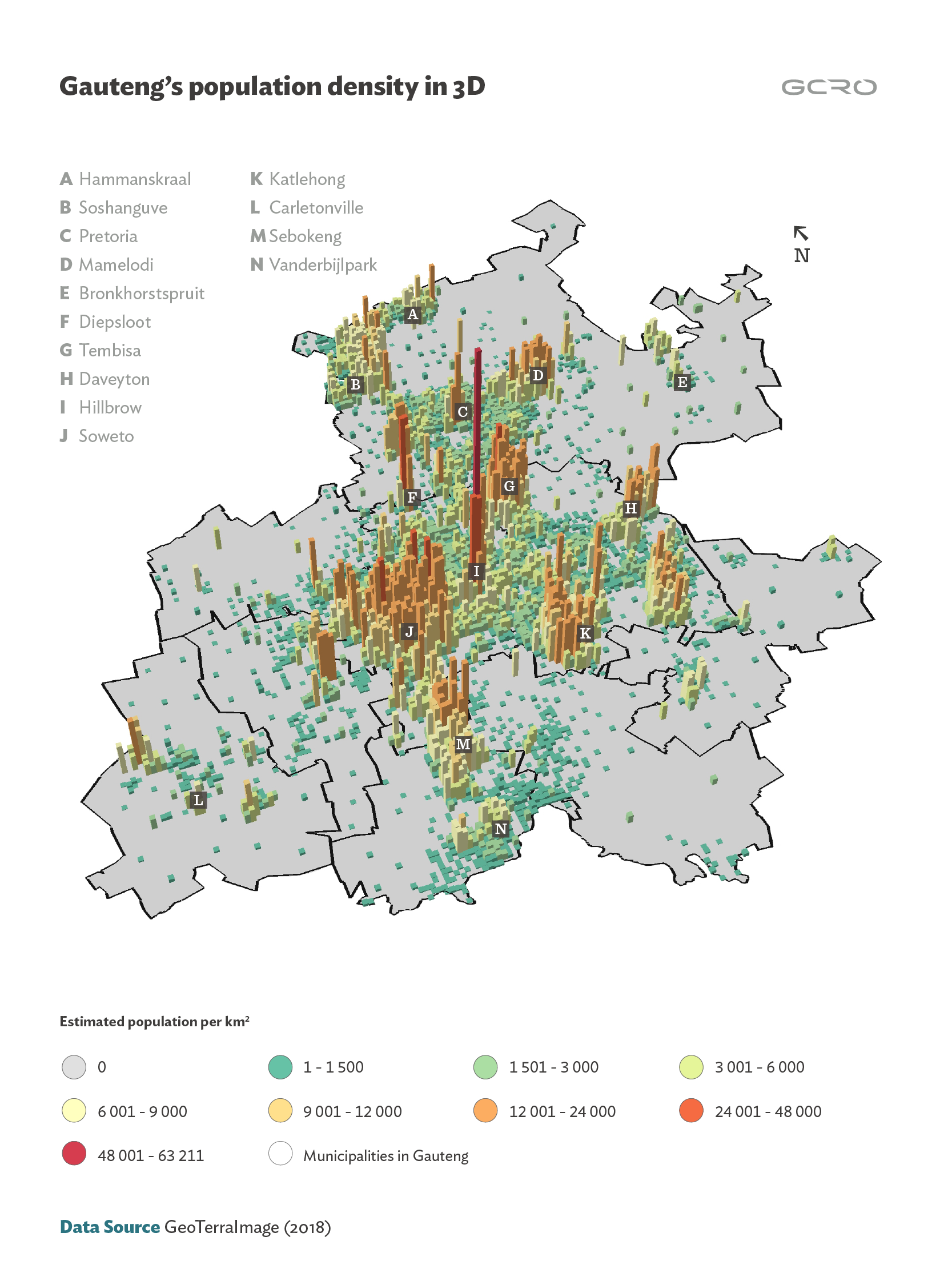 Urban density, particularly around key economic centres and transport links, is generally considered desirable because of a range of associated benefits (see the April 2020 Map of the Month), including economies of scale, infrastructure efficiencies, and greater accessibility of people to job opportunities and urban amenities. The concentration of people in urban areas is one of the key reasons why cities thrive as centres of innovation.

However, high population density can also be associated with a range of negative consequences. In particular, the COVID-19 pandemic has raised concerns that dense urban areas (including townships and informal settlements) increase the risk of transmission. Comparisons have been made between well-performing low-density cities and high infection rates in very dense cities and some people are convinced that low density is “safer”. In line with this, some propose de-densifying parts of cities with the hope of reducing the transmission of COVID-19. The Department of Human Settlement, Water and Sanitation in South Africa has proposed de-densification as a potential way to combat COVID-19 in informal settlements, where preventative hygiene and social distancing are particularly challenging to implement.

There is little agreement on whether de-densification is a good idea in principle, given the many ways in which urban life benefits from higher population densities and that density in itself does not spread the COVID-19 virus. Even if there was sufficient agreement on whether de-densification, in principle, is an appropriate strategy to combat COVID-19, the task of measurably de-densifying places would require the relocation of very large numbers of people. In practice, ‘lowering the peaks of density’ in Map 1 would be an enormous, if not impossible, undertaking. In addition to Map 1, we have developed an interactive visualisation (below) to give some sense of the size of the de-densification task in Gauteng, if it was to be pursued.

This interactive visualisation represents a thought experiment to help understand the relationship between density, population size and land area. This interactive visualisation considers what it would take to bring population density down to a particular threshold, in terms of the number of people who would need to be moved from densely populated areas and the minimum land area that would be required for their relocation.

The visualisation allows you to use a sliding scale to set hypothetical caps on density (number of people per square kilometre). It then calculates what it would take to achieve this maximum density across Gauteng, and presents these results in three graphs and a map. The graphs show the following:

An ideal density guideline is always circumstantial and it needs to be considered along with household crowding, access to basic services and amenities, and the lived experience of density. Therefore it is very hard to include a density guideline here, but we can illustrate the size of the task. Map 2 (in the visualisation) is divided into 1 km2 blocks and shows the number of people in each square kilometre block who would need to be moved to achieve the selected density. The darker the green colour of a block the more people would need to be moved out of this area to achieve the selected maximum density. Importantly, Map 1 and 2 also provide a sense of the spatial scale of the de-densification task. The areas with high densities are spread across the province because most municipalities in the city-region have polycentric urban forms. The maps also show that any unoccupied or low-density land that could be used for resettlement is not located close to economic and transport nodes.

A de-densification strategy outlined by the national Human Settlement, Water and Sanitation department indicates that just over 14 000 units have been made available in Gauteng for people living in very dense informal settlements. This would accommodate approximately 42 000 people, assuming an average household size of 3 people.2 The proposed units have been allocated to various settlements in Gauteng. The 1 402 units that have been allocated to Zandspruit would reduce the population density of the settlement by about 20 % (Figure 1, below) and the 4 734 units allocated to Alexandra would only be able to reduce the density of Alexandra by about 11 % (Figure 2, below). This means that these settlements in effect remain very dense. The many other settlements in the province (like Soweto, Daveyton, and Tembisa) where new units have not been allocated also remain densely populated and at risk. 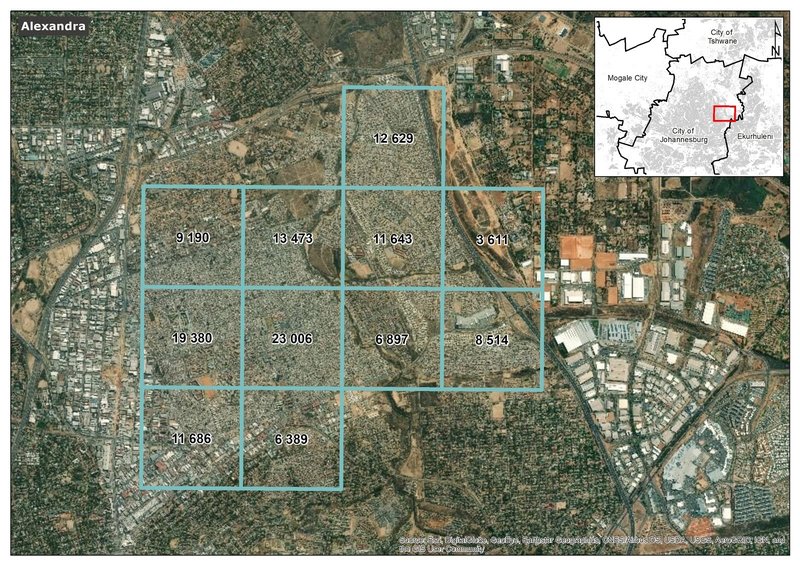 While this de-densification strategy provides accommodation for some of the people currently living in dense and informal locations, the visualisation presented above highlights the inadequacy of such an approach in measurably lowering peak population density. The proposed strategy can only accommodate a small proportion of the population and would still leave many residents in ‘unfavourably’ high density settlements where testing, tracing and preventative care remain the only solutions to combat COVID-19.

Although a decisive early lockdown seems to have slowed the spread of the disease, and has moderated demand on health services, the interventions we implement next will have long term consequences for urban spaces and their ability to meet the needs of their inhabitants.

Deliberate planning for densification provides significant opportunities and benefits for cities, which are likely to be important in the post-COVID-19 development era. While the COVID-19 pandemic will have a long lasting impact on the way cities are developed, the value of transit oriented development is likely to endure, albeit with greater emphasis on public health.

While some policy positions name density as a problem to be addressed, vilifying dense areas in the context of the pandemic suspends the possibility of a more holistic recognition of the important role of density in cities. Furthermore, we encourage some deeper engagement with the long term implications of de-densification.

Whole books and journal articles have been written on the benefits and drawbacks of densification and de-densification, and there have been numerous articles on de-densification in South Africa over the past couple of months, so we do not attempt to resolve these debates here. Rather, we conclude with some thoughts and questions that hopefully will stimulate further analysis and constructive debate:

1 The modelled population estimates were provided per Enumerator Area (EA) in Gauteng. For the purpose of this visualisation, we aggregated EA data to a square kilometre grid by using the centroid of each EA. The result of using population estimates (which sometimes contain anomalies) and the spatial aggregation method, revealed two clear outliers. In these two cases the estimated population was much higher than evidence on satellite imagery would suggest. Accordingly for the 3D visualisation, we edited these values to more likely totals. Although the dataset contains some anomalies, it is the best dataset we have available at the necessary level of detail.

Thanks to Ivan Turok for comments on the April 2020 map that fed into this map.