April 2020 marks the 100th edition in the GCRO’s Map of the Month series. Since the first map of the month was published in September 2009, maps have explored the spatial patterns of a wide variety of subjects, including population distributions, patterns of urban growth, socio-economic circumstances and social attitudes, to name a few. Population density has been one of the recurring themes in this series - it has been the subject of 11 previous maps (January 2019 Population concentrations: night vs day; March 2014 Gauteng-sized populations; August 2013 Population dot density (Census 2011); March 2013 Census 2011 population by race; February 2013 Census 2011 population cartograms; May 2012 Population density; October 2011 City of Joburg population; October 2010 GCR Population by race (Census 2001); April 2010 GCR with population radius (Census 2001)). For the 100th Map of the Month we revisit the theme of density and deploy a method of representing density that we have not previously used. This approach is inspired by a series of maps that explore population density by contrasting the most densely populated areas with the least dense areas (Map 1). 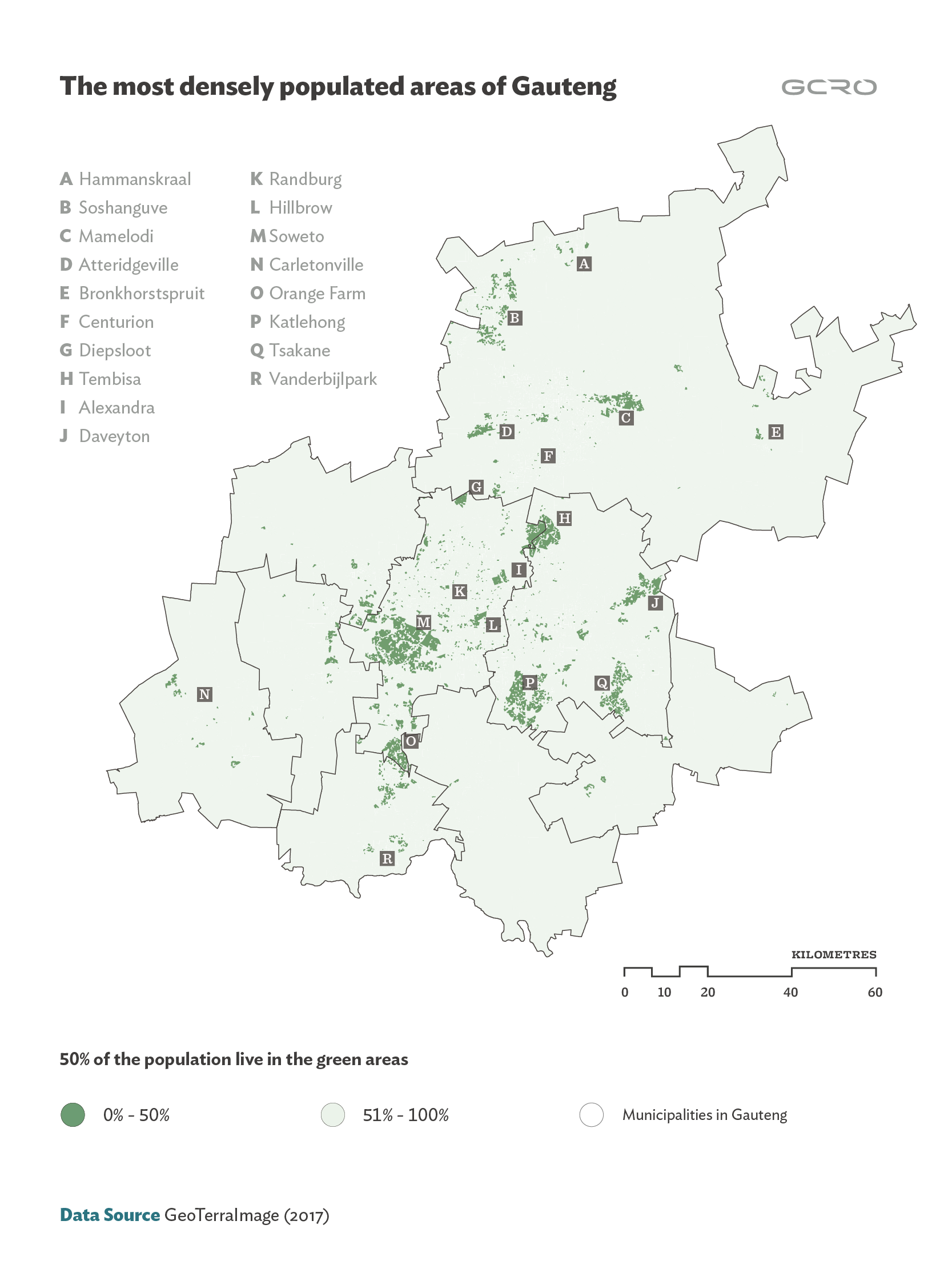 Map 1: Half of Gauteng’s population.

Map 1 shows where 50% of Gauteng’s population (approximately 7.5 million people) is concentrated. The map draws on 2018 population estimates at the Enumerator Area (EA), which we sourced from GeoTerraImage. After ranking EAs from high to low according to their population density, we determined the cumulative proportion of the whole population in each EA and select those up to 50% of the population. In other words, the green areas on Map 1 indicate the densest EAs which together are home to half of the Gauteng population.

Map 1 emphasizes that even though Gauteng is the densest province in South Africa, the reality is that most people who live in the province are concentrated in a few clusters. While some of these clusters are located close to core business areas in Johannesburg, Tshwane and Ekurhuleni, many of the clusters are located on the edges of the urban footprint, because of the legacies of apartheid planning, exacerbated by some post-apartheid developments. This exercise underscores the importance of historical townships as fundamental urban nodes within the city region.

Density: A ratio of population to land area 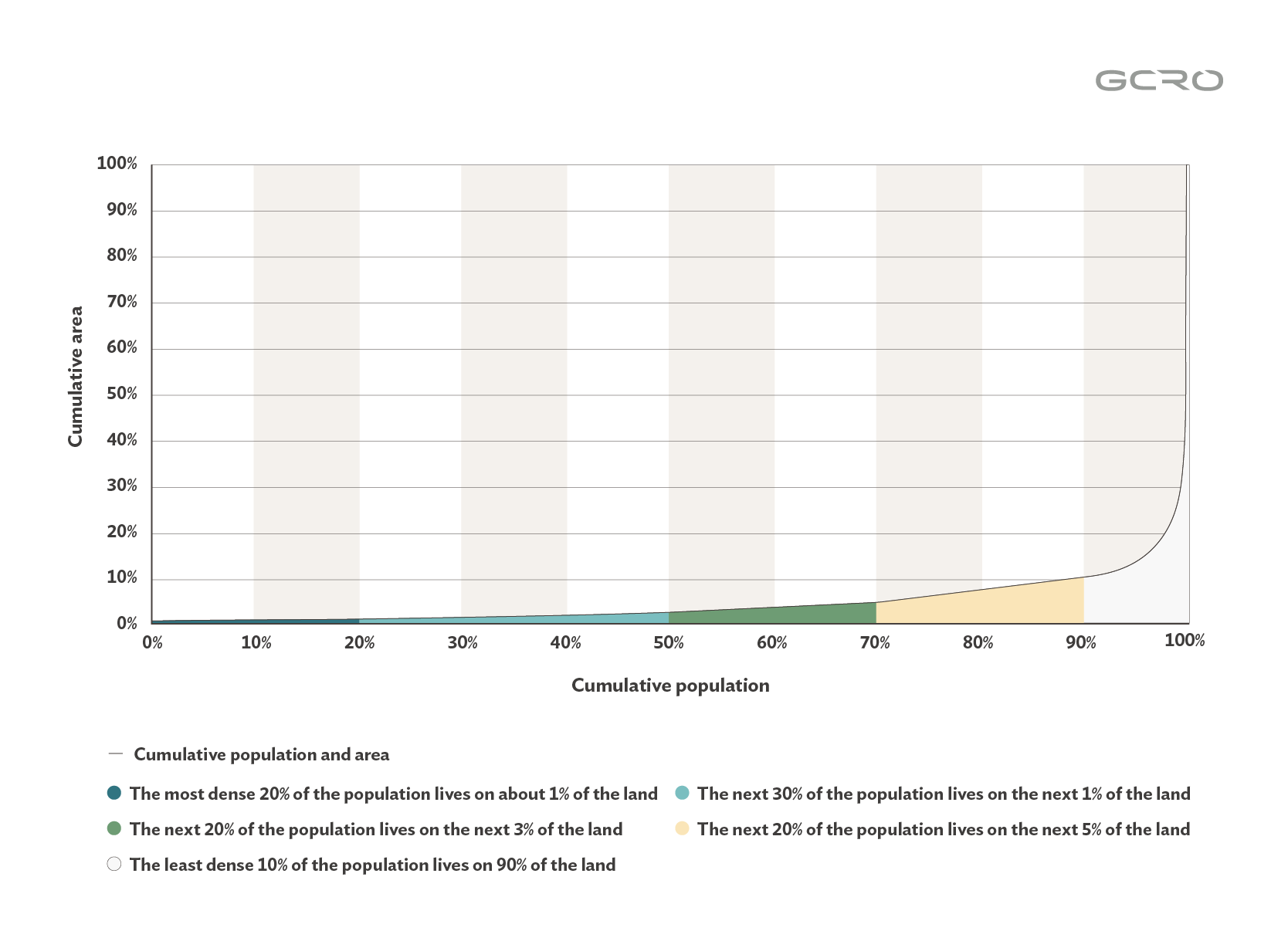 Gauteng's average density is 737 people per square kilometre but Figure 1 and Map 2 show how density varies across the province. The most dense 20% of the population lives on only 1% of the land area of Gauteng (area shaded dark blue) in contrast with the least dense 10% of the population, which lives on 90% of the province's land area (the section below the line shaded white). While 90% of the land may be sparsely populated with people it does not only contain residential areas but is occupied with the many other land uses and activities that comprise the Gauteng city-region. These are core aspects of the high-functioning city-region and we have explored these land uses in 17 of our previous maps, including: July 2019 Industrial and commercial buildings; September 2018 Shopping centres; February 2017 Business locations; October 2016 Mining areas; December 2015 Urban footprint; January 2013 Green networks; June 2012 Commercial and industrial buildings; April 2012 Agricultural activities; March 2012 urban land cover. 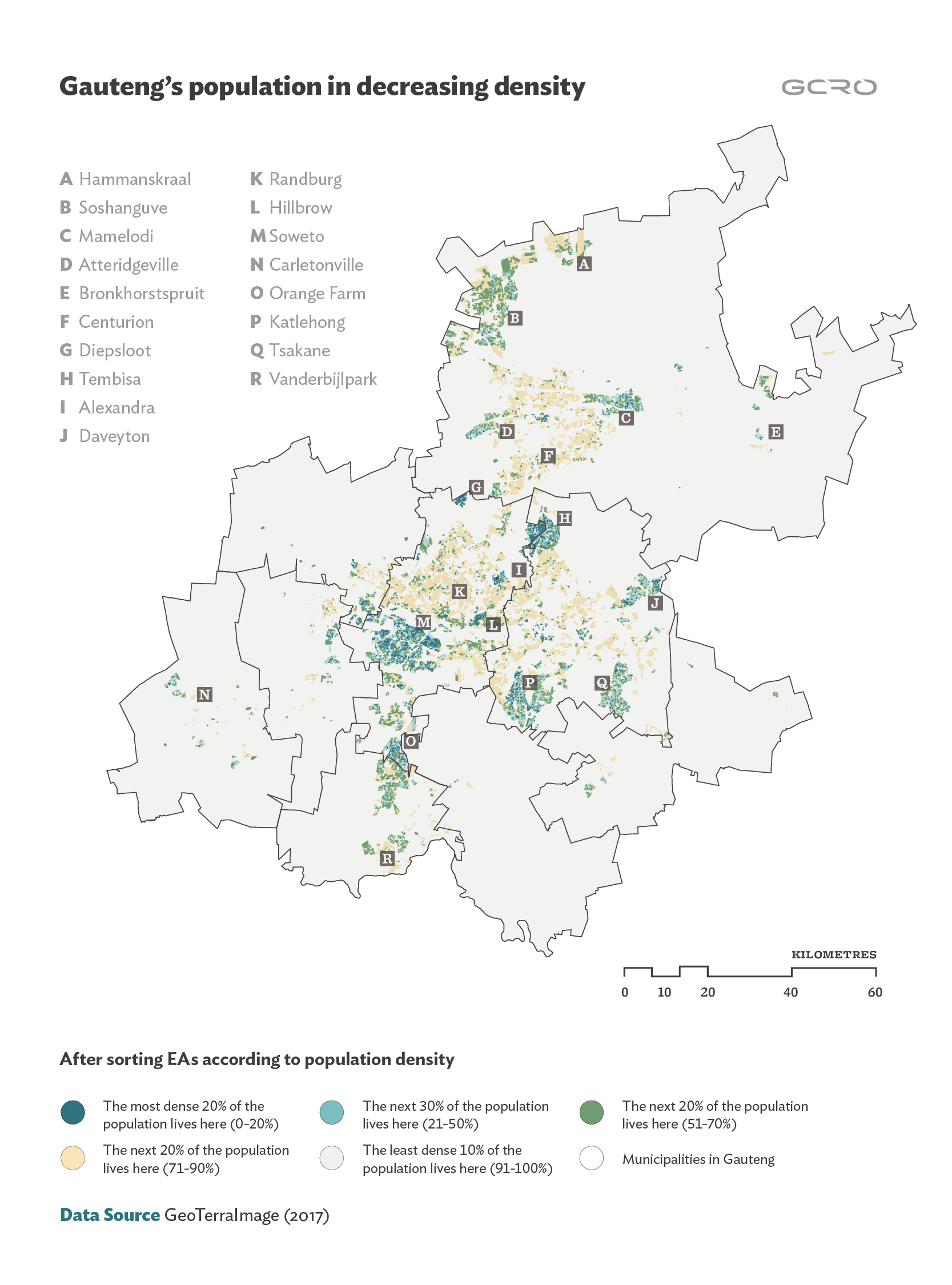 However, high density or large concentrations of people do pose some risks, particularly environmental and health risks. Highly populated areas require greater levels of service provision, from housing and sanitation to facilities such as schools and parks. In crowded conditions, where there is inadequate sanitation, water provision and refuse collection, diseases such as cholera and typhoid can spread rapidly. Where settlements do not leave space for green infrastructure, residents do not beneift from the many advantages of green spaces (like improved water management, pollution reduction and improved quality of life) (May 2017 Green vegetation and impervious surfaces).

The benefits and drawbacks of higher population density should always be considered in the context of the broader dynamics at play in any city region. Densities are more often not planned but accommodated as the labour and property markets change and are indicative of an urban system that has evolved over more than a century. Urban problems cannot be squarely blamed on the character of urban spaces (like their population density) while ignoring the political and economic systems that created the spaces. If the focus is only on the city structure, the systemic policy failures that have made certain places and populations vulnerable are being overlooked.

The densest square kilometres in Gauteng

The chart and maps show that dense residential settlements in Gauteng are made up of a variety of housing types that accommodate high population density in the city-region. To illustrate this we have selected four densely populated areas in Gauteng and overlaid the area of a square kilometre onto the satellite photo (see Figure 2). As we might expect, medium to high rise downtown areas are among the most dense parts of the city region, as illustrated by Hillbrow and Berea. Other dense areas are informal settlements - parts of Tembisa; Diepsloot; Soshanguve and Katlehong. Many of the relatively dense parts of the province are single storey unplanned and planned settlements such as Mamelodi. The majority of the density is in the form of backyard dwellings of which there are now more in number in Gauteng than dwellings in informal settlements. High densities can occur in multiple dwelling types. The history of our maps on housing can be found in the following: February 2020 Residential types; October 2018 Residential buildings; February 2018 Backyard and informal dwellings; June 2015 GPEMPF and mega-housing projects; May 2015 Mega-housing projects; January 2015 Gated communities; February 2014 RDP housing; November 2013 Residential growth; September 2013 Backyard structures; November 2012 Housing typologies; September 2012 Gated communities. 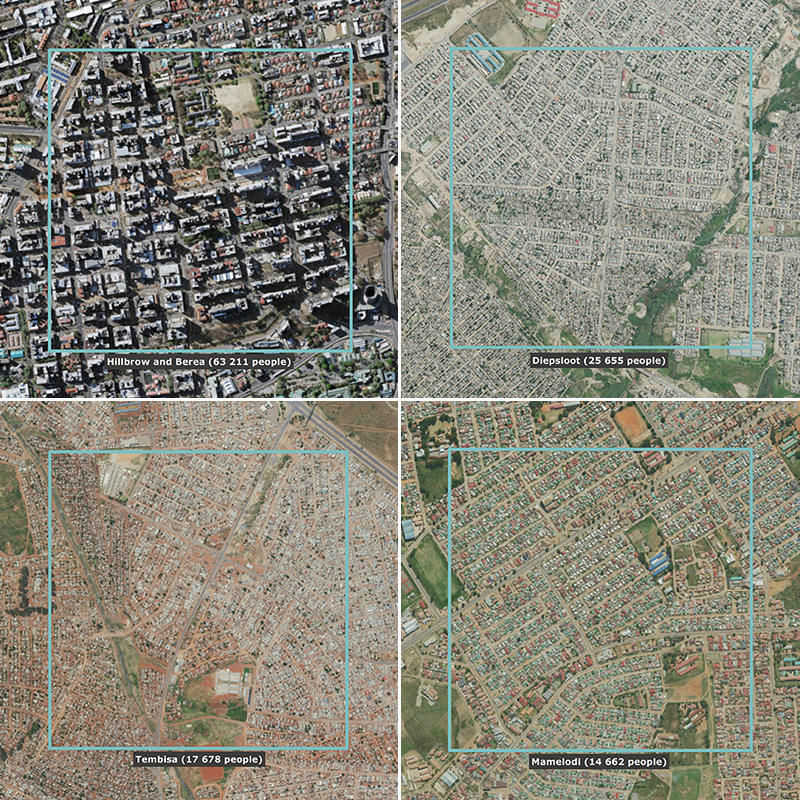 Figure 2: Population per square kilometre in four areas in the Gauteng City-Region. 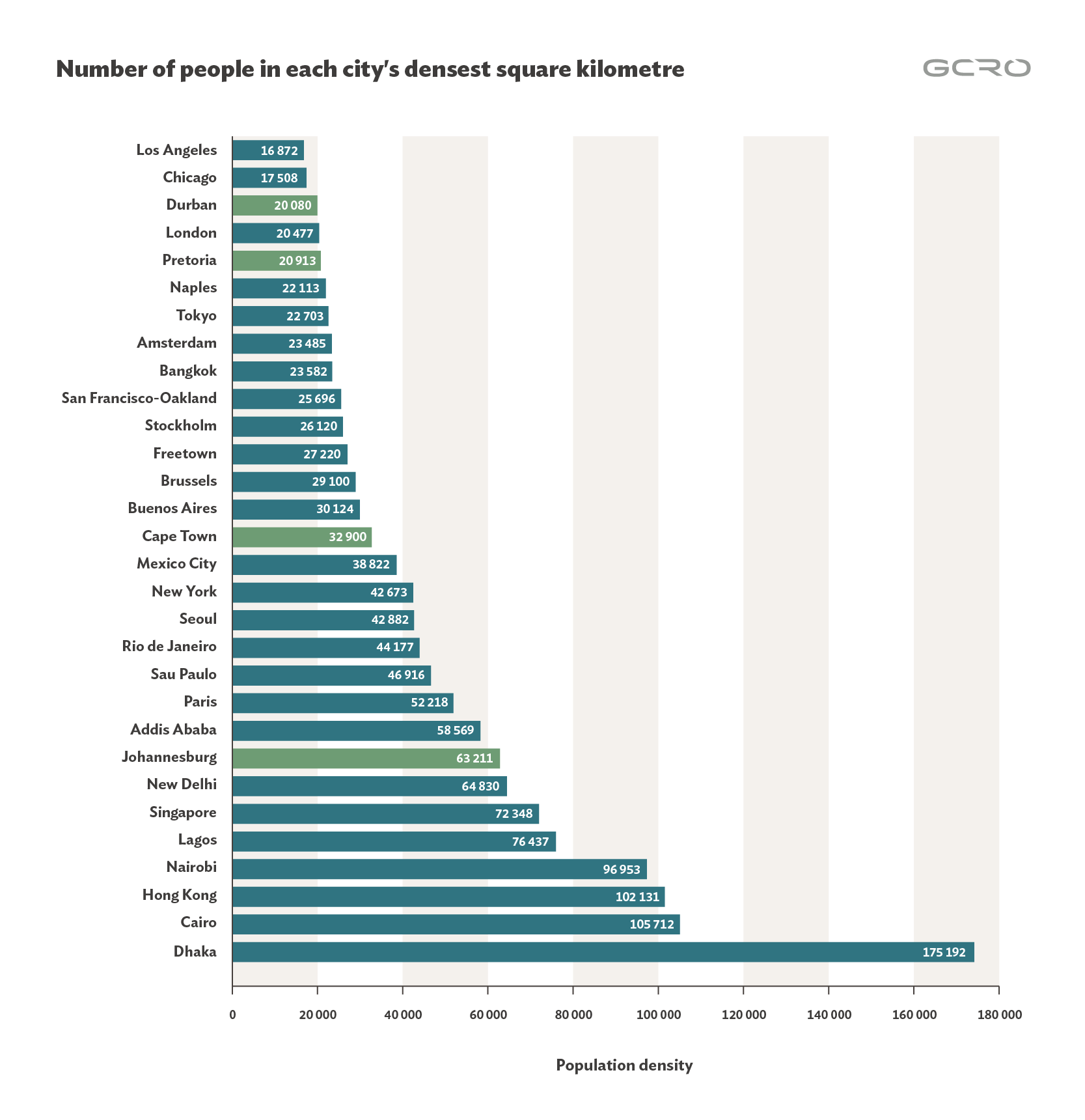 Figure 3: The population of the densest square kilometre in cities around the world (Data sources: GeoTerraImage 2017; Global Human Settlement Layer 2019).

Since preparation for this map began, the COVID-19 pandemic has altered the course of many plans, including replacing previous ideas for the March 2020 Map of the Month with rapidly assembled data and analysis relevant to government decision-making and responses to the pandemic. However, population density continues to be relevant to understanding the potential impacts of the COVID-19 pandemic. The most recent example of this approach is our analysis of population density in relation to the risk factors associated with the spread of COVID-19.

In celebration of this series milestone, this article links to many of our previous maps of the month and in this data visualisation you can explore all 100 maps. Over its history, the GCRO Map of the Month series has aimed to make spatial data and analysis more accessible and has produced maps that relate to in-depth research projects (November 2017 Spatial footprints of mothers; May 2013 Defining the core and periphery; December 2012 Grey vs. Green Infrastructure) as well as maps that have responded to current events such as elections (May 2019 Gauteng provincial election results; June 2014 Provincial voting results; May 2014 Voter registration) or waves of xenophobia (March 2017 Attitudes on the acceptability of violence towards foreigners). This 100th map is no different. We began planning the map in late 2019 and settled on population density because it was an early and recurring theme in our series and because we were inspired by this approach to mapping density which we had not yet used. The relevance of population density is evident in the history of our 100 maps of the month and no doubt will feature in more maps to come.

Recommended citation: Parker, A. and Hamann, C. (2020) ‘The most densely populated areas of Gauteng’, GCRO Map of the Month, Gauteng City-Region Observatory, April 2020.