The Gauteng City-Region sits at the top of an escarpment which functions as a continental drainage divide or watershed. This divide, shown by a red line on our August 2017 Map of the Month (Figure 1), runs through Randfontein in the west, via the gold mining belt of Krugersdorp, along the Northcliff Ridge, onto Braamfontein, through Kensington, over OR Tambo airport, and north of Benoni. Rain that falls to the south of the divide flows into the Vaal River and eventually out into the Atlantic Ocean via the Orange River.* Rain that falls north of the watershed flows into the Indian Ocean via the Limpopo River system. The watershed line shown in green on the map separates the Crocodile River to the west from the Olifants River to the east, both of which are tributaries of the Limpopo River.

The map shows these major watersheds in relation to the rivers, dams and wetlands of the wider Gauteng City-Region. A key aspect of the Witwatersrand watershed is that it bisects the urban area as illustrated in the accompanying diagram (Figure 2 below). In addition, we have depicted Gauteng’s watersheds (the blue ribbon) on a 3D model of Gauteng that shows the topography and built form of the city-region (Figure 3 below).

The map depicts the different ways in which water systems serve as barriers or borders within an urban system. Rivers are visible barriers in the landscape and are often shown on a map as a boundary between two properties or territories. Watersheds are a less visible kind of boundary, but are fundamentally important in dividing between one drainage system and another, as illustrated in Figure 2. 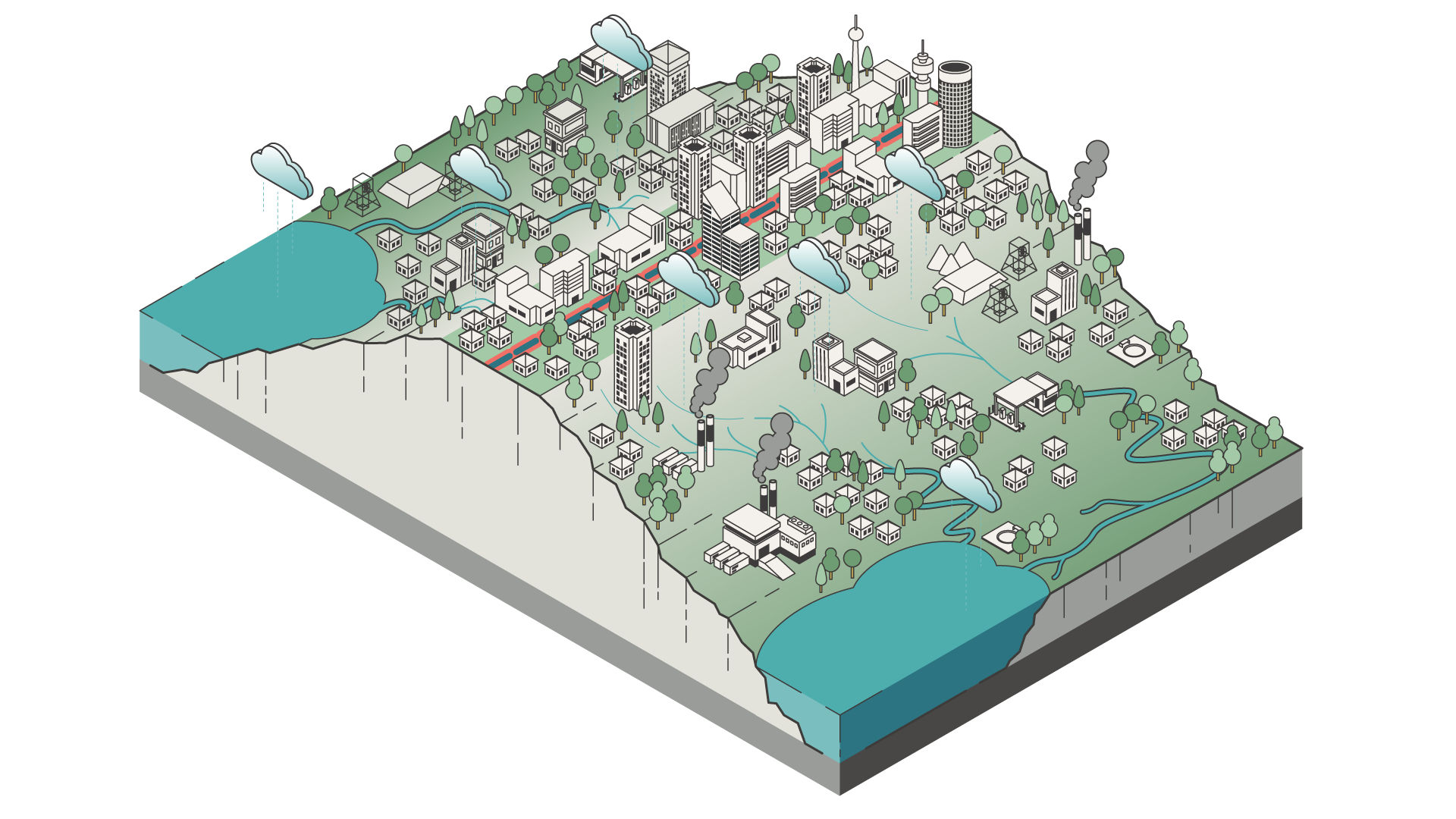 The consequence of Gauteng being positioned on a watershed is that water flows out of Gauteng rather than into it, and the closest significant water source is the Vaal River and dam which sits on the southern provincial boundary. The GCR is one of the largest urban areas in the world without a major water source nearby. Today, water is brought from as far as Lesotho to sustain the GCR. High and growing demands for water to meet urban and economic needs mean that water security is a key strategic consideration. These issues are explored further in GCRO’s forthcoming report on water security.

Resources have played an important role in Gauteng’s development and have fundamentally shaped both the landscape and people’s day-to-day existence. Poor management of limited resources disproportionately affects marginalised communities. However, opportunities exist to build bridges through sustainable and equitable development, as well as better appreciation and more effective governance of limited resources.

The watersheds of the GCR are one kind of border explored in our exhibition, Shifting Borders and Building Bridges, being hosted at the 2017 Seoul Biennale for Architecture and Urbanism in South Korea from 1 September to 5 November. The exhibition also examines other borders related to space, society and institutions. To more fully explore these borders and bridges shown in our exhibition, view our interactive visualisations, and to find out more about this event see our news story.

Note:
* Of course, not all rain makes it to the ocean: some will be captured for urban or agricultural use, some will evaporate, and some will be diverted in other ways.

Link to projects: What is the GCR?