[Read with the more detailed high resolution dot density maps, downloadable as a .pdf document below]

Following the provincial government elections in May 2014, the local government elections in September 2016, and the provincial elections in May 2019, the GCRO released a series of maps that plotted and analysed the election results for the main political parties. Here we repeat this exercise, this time focusing mainly on the turnout per ward in the November 2021 municipal elections. Using the dot density technique deployed for previous Maps of the Month, we also once again map the distribution of Proportional Representation (PR) votes won by each of the top political parties in Gauteng.

However, 2021 saw the number of registered voters stay static from previous polls, and also a drastic drop in voter turnout compared to the previous 2016 local elections. Some 3,6 million of the 6,2 million registered voters in Gauteng cast their votes in the 2016 municipal elections, giving a turnout of 58%. This time round only 2,7 million of 6,2 million registered voters cast ballots, driving turnout down 14,3 percentage points to 43%. (Independent Electoral Commission, 2021). Runciman and Bekker (2021b) point out that this was the lowest turnout of any election in post-democracy history.

The map below shows that the percentage of registered voters who did not vote (what we also variously term ‘missing voters’ or ‘registered non-voters’) was not evenly distributed across wards in Gauteng. Although all wards show relatively high percentages of registered voters who did not participate – most wards are above 40% – the highest percentages of registered non-voters were in wards dominated by townships, informal settlements, more rural areas, as well as in inner-city areas. Some of the lowest voter turnouts were seen in Mabopane, Soshanguve, Hammanskraal, Katlehong, Soweto, Orange Farm, Diepsloot, Sebokeng, central Pretoria, and central Johannesburg. The more rural and peri-urban areas of Eastern-Tshwane (the area below Bronkhorstpruit on the map) and the West Rand (between Soweto and Carletonville) also appear to have had relatively high proportions of missing voters. In overall terms lower levels of turnout were seen in areas that are the traditional political heartland of the African National Congress (ANC). In general, suburban areas – the historical voter base of the Democratic Alliance – and areas such as Midvaal where the DA has governed for several municipal terms of office, enjoyed much higher levels of voter participation. 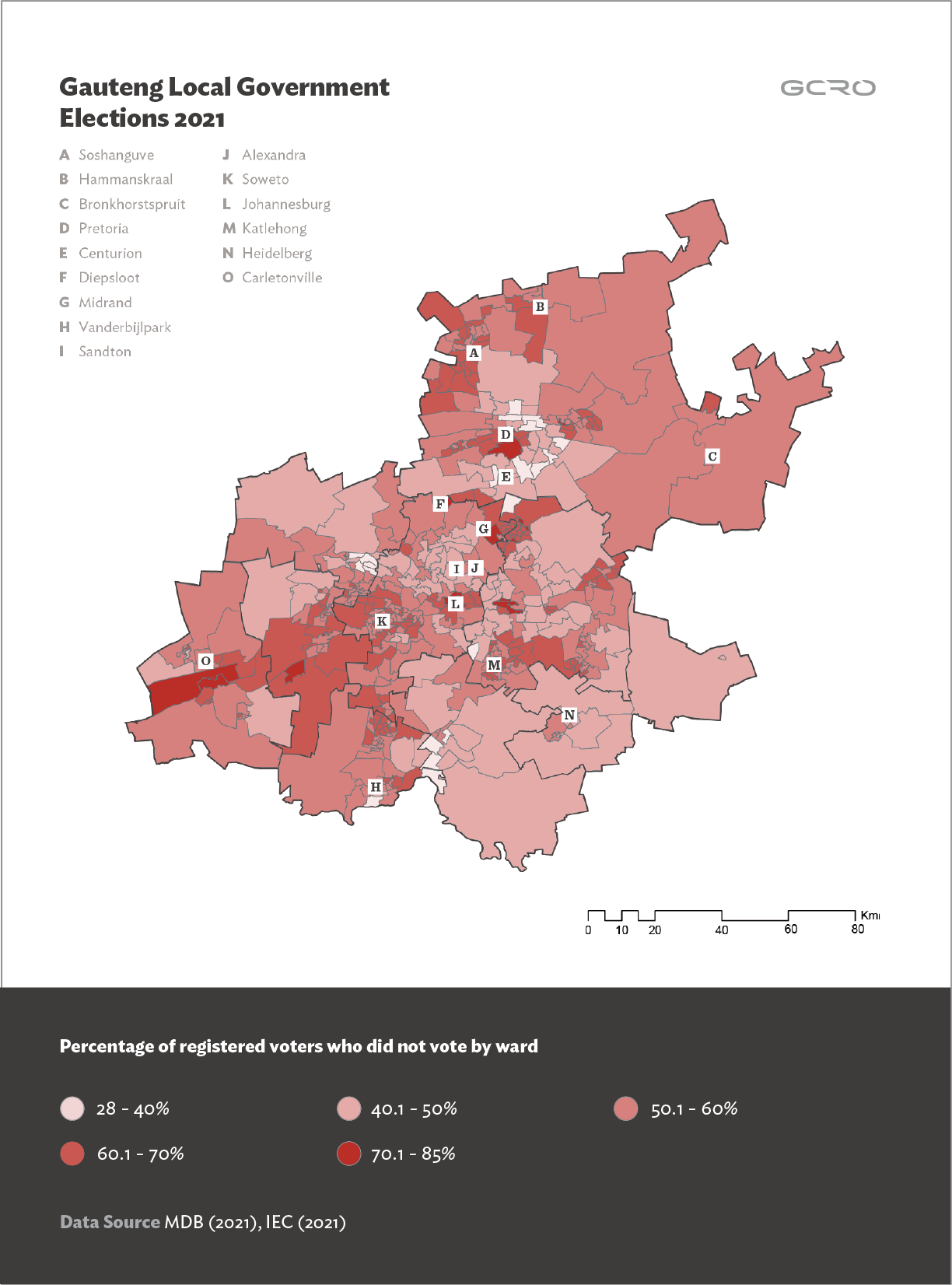 The reasons for the low turnout are arguably complex and multifaceted. They range from the fact that mundane individual and administrative factors (such as not being able to get to the voting station on the day, health constraints, or not being in the right voting district) were likely exacerbated by COVID-19, through to higher levels of political disillusionment and disengagement. The relative weight of different factors in driving lower turnout is a matter for debate. Basing their arguments on a recent telephonic survey, Runciman and Bekker (2021a and 2021b) assert that individual factors (such as being too busy on the day, or constrained by poor health or care responsibilities) as well as administrative barriers (such as encountering long queues or ID issues at voting stations) counted far more than is usually recognised in other studies. They also point to the ‘fluidity of voter attitudes’, with many voters who did not vote having participated in previous polls, and also many voters who previously abstained, now participating, Runciman and Bekker (2021b). Nonetheless, their data does point to a sizeable share of registered non-voters staying at home because they were unhappy with local government performance, uninterested, disillusioned, or unable to find a political party to identify with. In the context of Gauteng, GCRO’s most recent Quality of Life Survey 6 (2020/21) pointed to a large decline in levels of satisfaction with, and trust in, local government and other spheres of government, a factor that may have negatively impacted voter turnout as well as who Gauteng residents voted for (Mushongera et al, 2021).

One of the headline stories from this election has been that the major political parties (notably the ANC and the DA) both saw significant declines from the previous municipal elections, while minority parties saw some notable gains. The table above shows that ANC lost 680 256 votes, a fall of 42%, from what it achieved in 2016. Its share of the vote across Gauteng dropped 10,6 percentage points to 35,5%. Meanwhile the Democratic Alliance (DA) lost 568 663 votes. This was less in absolute terms than the ANC, but at 43% it represents a larger percentage fall from its 2016 tally. Its share of the votes cast dropped 9,3 percentage points from 37,2% in 2016 to 27,9% now. Even the Economic Freedom Fighters (EFF) fell by 92 032 votes, 23% less than its 2016 count. Its share of the ballots cast stayed static, at just over 11%. None of South Africa’s dominant political parties can claim to have won significantly more voter sympathy at the expense of the others in 2021, regardless of how complicated post-election negotiations have resolved to deliver new coalition governments for most of Gauteng’s larger municipalities.

The declines for the three biggest parties, as well as the overall lower turnout, is clearly illustrated by our dot density maps enclosed below. We include two sets of maps, comparing the 2016 and 2021 results for the ANC, DA and EFF (and then in 2021 for newcomer party ActionSA) at the Gauteng scale, and then zooming in to an area of interest focused on Soweto and the northern suburbs of Johannesburg.

At first glance, the maps show that the ANC and the DA remain the most popular political parties in Gauteng – of course within their respective strongholds. The ANC (represented by the orange dots does have a presence in suburban areas, but it remains the dominant party in township and informal settlement areas such as Soweto, Soshanguve, Katlehong, Diepsloot and Hammanskraal. Conversely, the DA (represented by blue dots) does feature in township areas, but largely still predominates in traditional suburban areas such as Sandton, Centurion and Midrand. There seems little evidence that the ANC has grown significantly in suburban areas, or that the DA has grown significantly in townships, between 2016 and 2021. Rather, the maps reinforce our overall line of analysis, of dramatically lower turnout, and losses for all the big political parties. Comparing 2016 and 2021, where both elections are mapped on the same basis of 1 dot per 20 voters, the overall lower turnout as well as the declines for the major parties in their traditional heartlands, are clearly visible in the noticeably thinner carpet of dots across Gauteng.

Click here for a downloadable .pdf that has all the maps at higher resolution.

Our detailed dot density maps also visually represent how the 2021 local election was marked by the appearance on the political stage of Herman Mashaba’s ActionSA (shown with green dots). The party gained 279 256 votes in Gauteng in 2021 bringing its vote share to 10,4%, just below the EFF’s 11,4%. This dramatic arrival is all the more remarkable because a mapping of ActionSA votes per ward clearly indicates that the new party achieved success both in township and informal areas traditionally dominated by the ANC, and in suburban areas that are the DA’s historical voter base. See below the zoomed in map, that isolates the ActionSA votes on the same 1 dot equals 20 votes. Note that ActionSA did not compete in municipalities outside the three metros, Johannesburg, Ekurhuleni and Tshwane. Across the three metros ActionSA’s green dots concentrate most in Johannesburg, and least in Ekurhuleni. But again the most significant conclusion from the maps is that it won support in areas across the socio-economic and race spectrum. The party’s presence is clear in Soweto, inner-city Johannesburg, Alexandra, Pretoria Central, Centurion, Katlehong, Soshanguve and Hammanskraal. The multidimensional appeal of this new political party, and the underlying politics that has enabled it to capture significant cross-race and cross-class support, deserve more careful attention in future analysis. 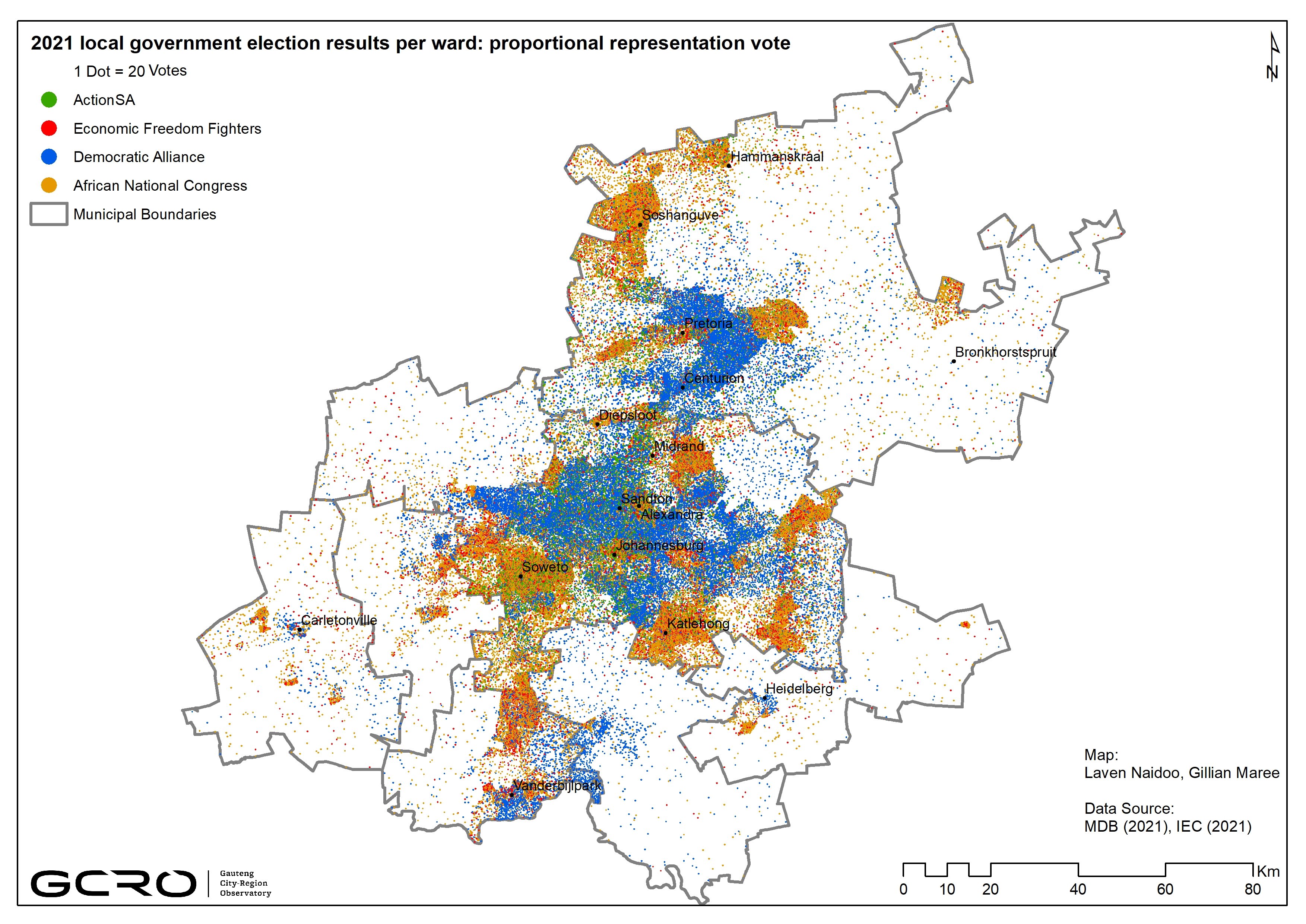 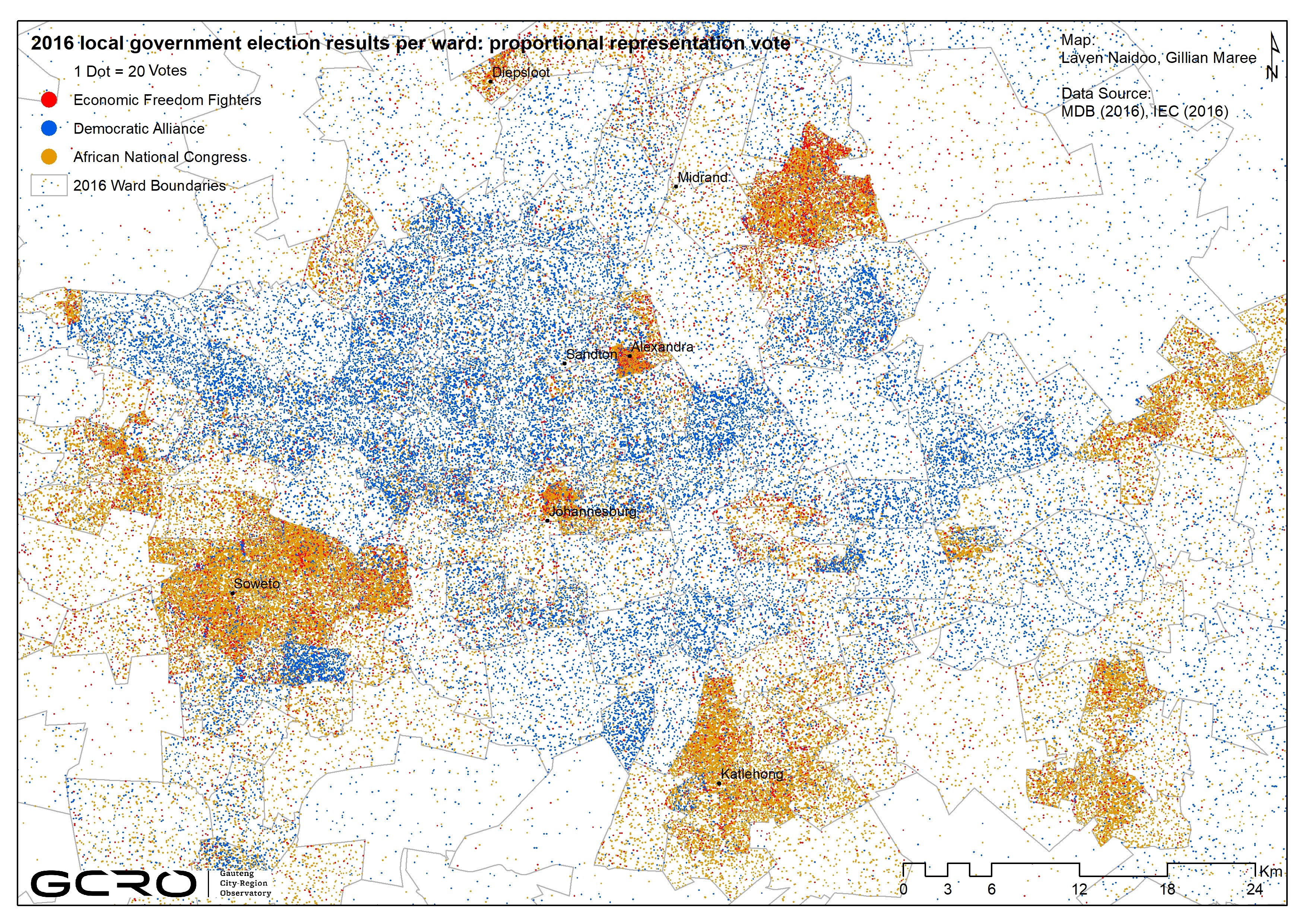 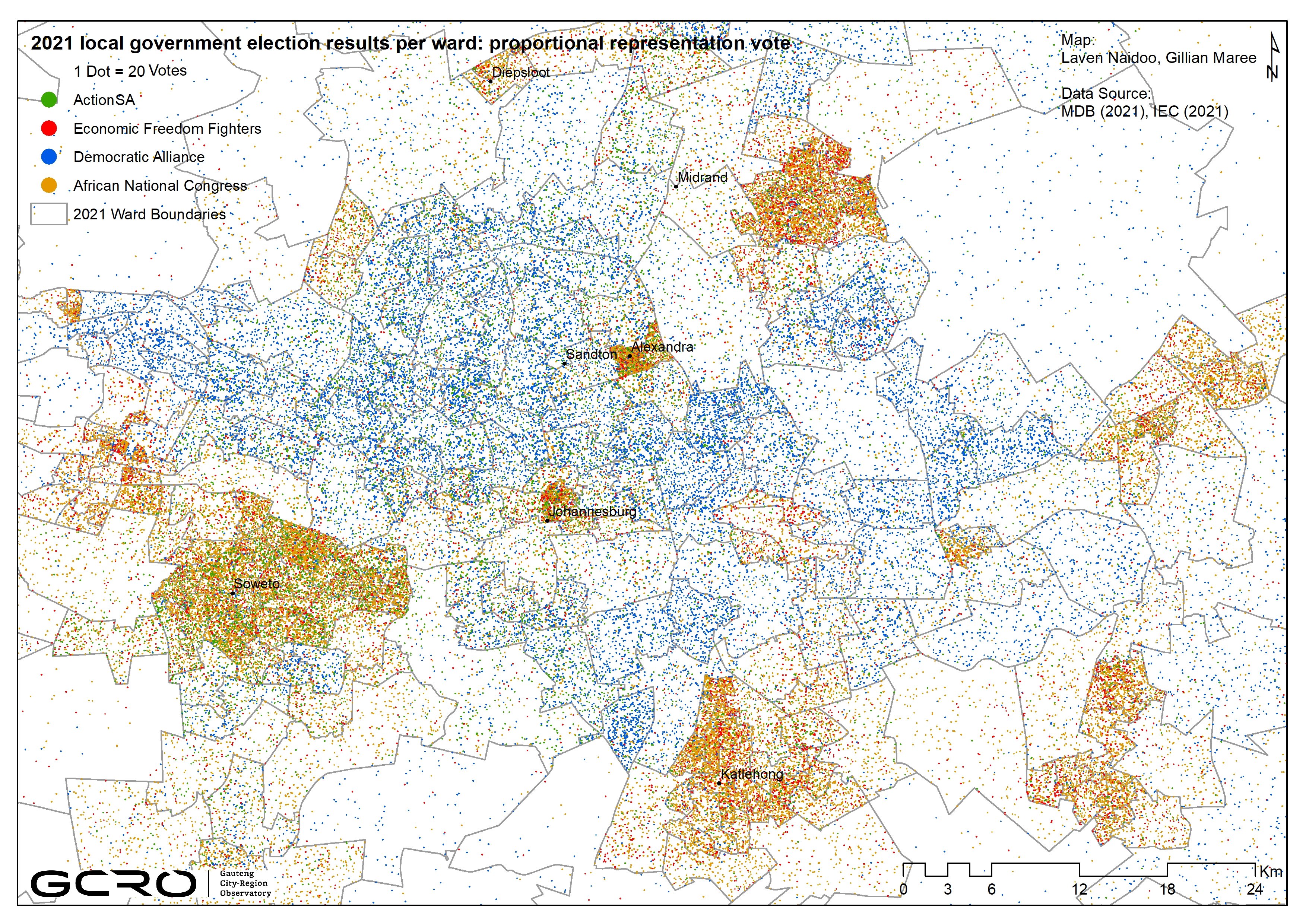 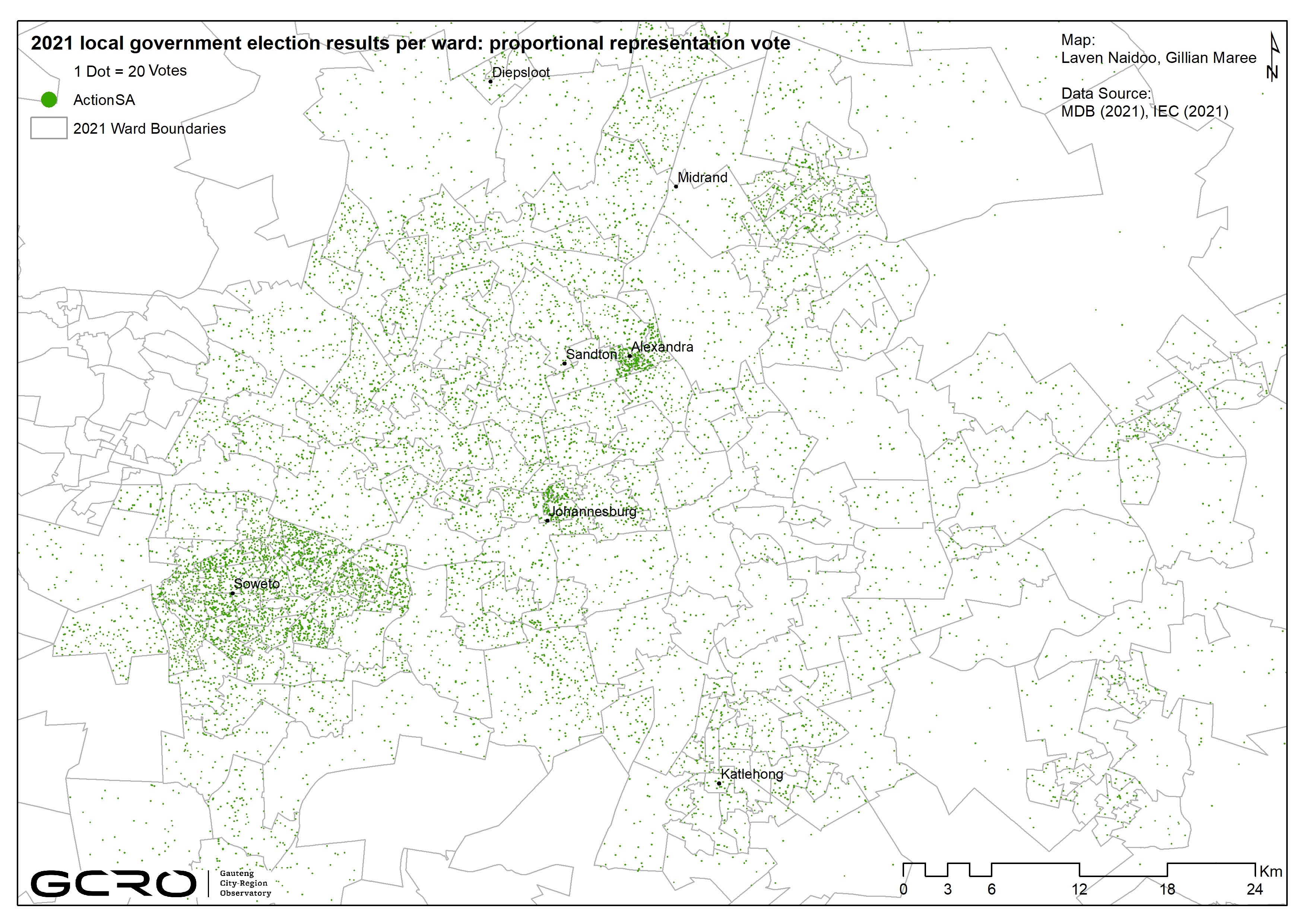 With huge thanks to Richard Ballard and Gillian Maree for thoughts and edits, and for support throughout the mapping process.