Our March Map of the Month explores the degree to which residents of Gauteng rely on public services. We make use of our Quality of Life V Survey (2017/18) data to illustrate the proportion of respondents living in each ward who report using two key public services – health (Figure 1) and education (Figure 2). QoL V respondents were asked where they usually access health services. We excluded respondents who reported that they don’t usually need healthcare, and then mapped the proportion that usually used public healthcare facilities for each ward. Respondents were also asked whether their oldest school-going child attended a public or private school. Excluding respondents without school-going children, we have mapped the proportion who reported sending their oldest child to a public school.

Who relies on public services?

Figure 1 illustrates that in township areas (for example wards around Soshanguve, Soweto, and Katlehong), high proportions of respondents usually use public healthcare facilities. By contrast, in more suburban wards around Bryanston and Centurion, reliance on public healthcare facilities is far lower. Residents of these wards are more likely to report relying primarily on private healthcare facilities, and also report far higher levels of medical aid coverage. When Figure 1 is considered together with Figure 2, which illustrates use of public schools, the consistency in the spatial distribution of the use of public services is striking. 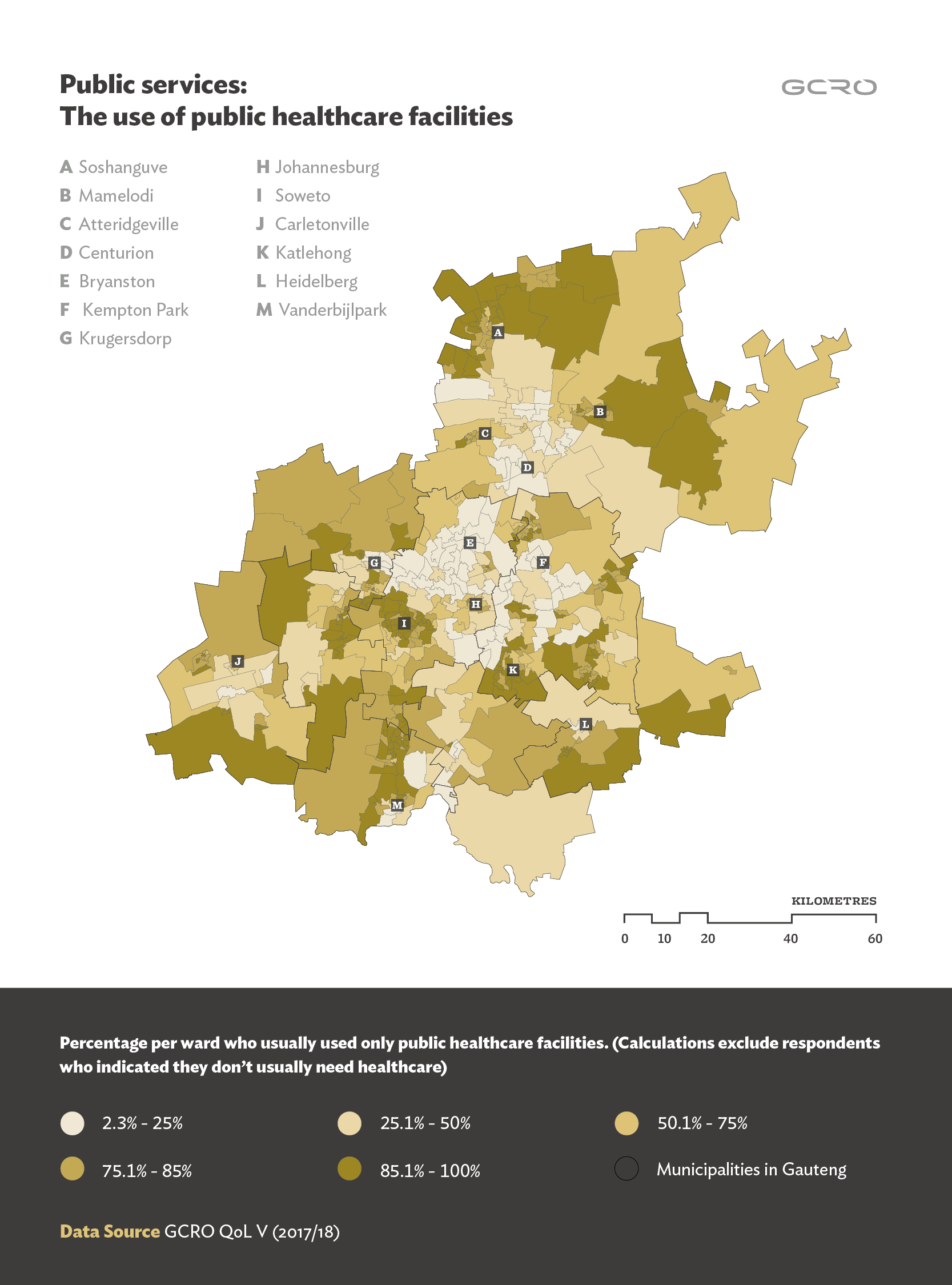 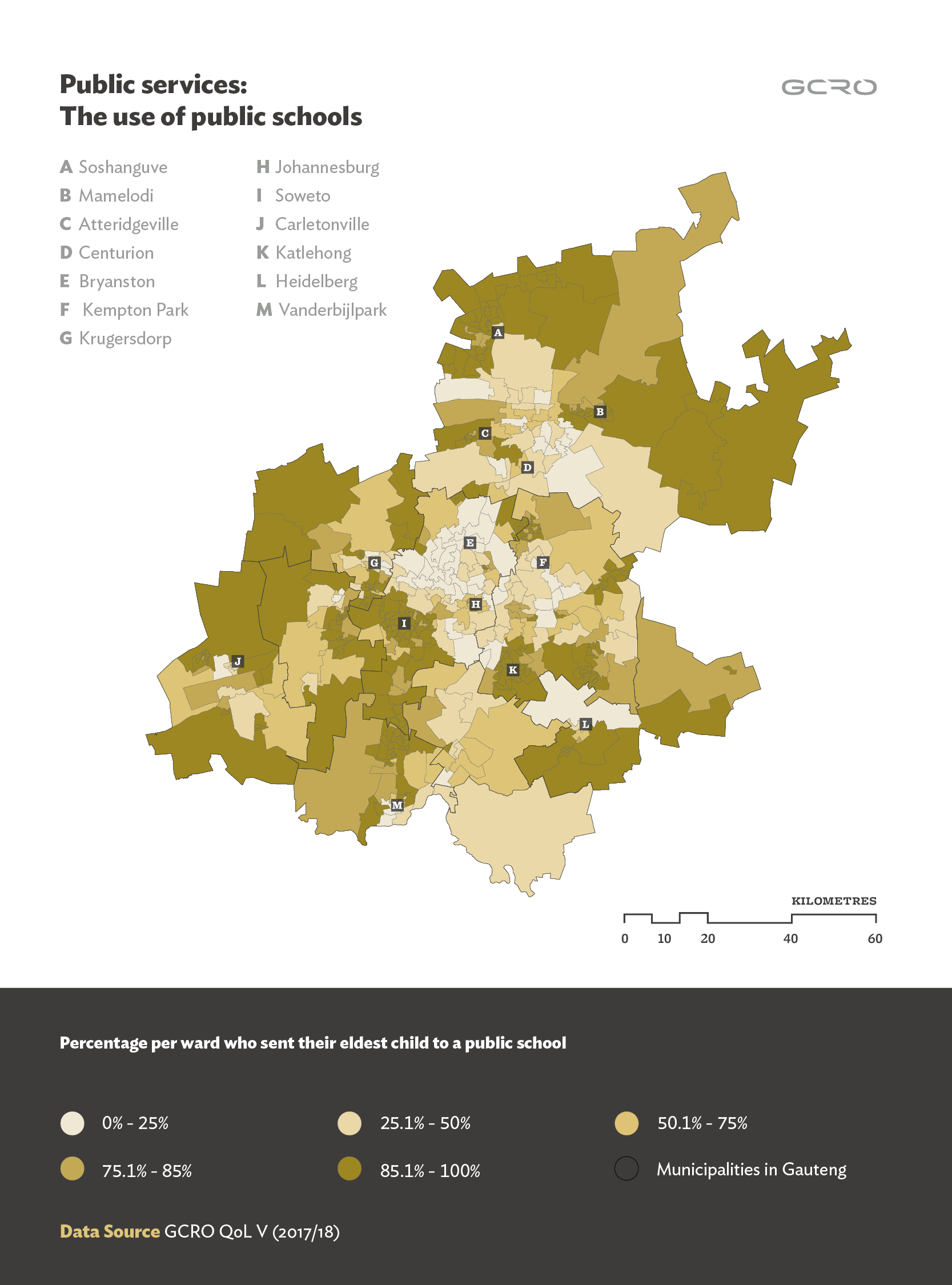 Many of the wards with high levels of reliance on public services, such as those around Mamelodi, Soweto and Katlehong, are extremely densely populated (more than 8 000 people per km2 according to 2011 census data). These wards also have a relatively lower socio-economic status as indicated by the low proportion of respondents with tertiary education qualifications in Figure 3. By contrast, suburban wards with lower levels of reliance, such as those around Centurion and Bryanston, are far less densely populated (less than 2 000 people per km2according to 2011 census data). This variation in population density means that demand for public services per km2 could be even greater in those areas where use is proportionately higher than the map would suggest. This is critical in understanding concentrations of demand, as well as the extent of the human impact when public services in these areas are not appropriately delivered. 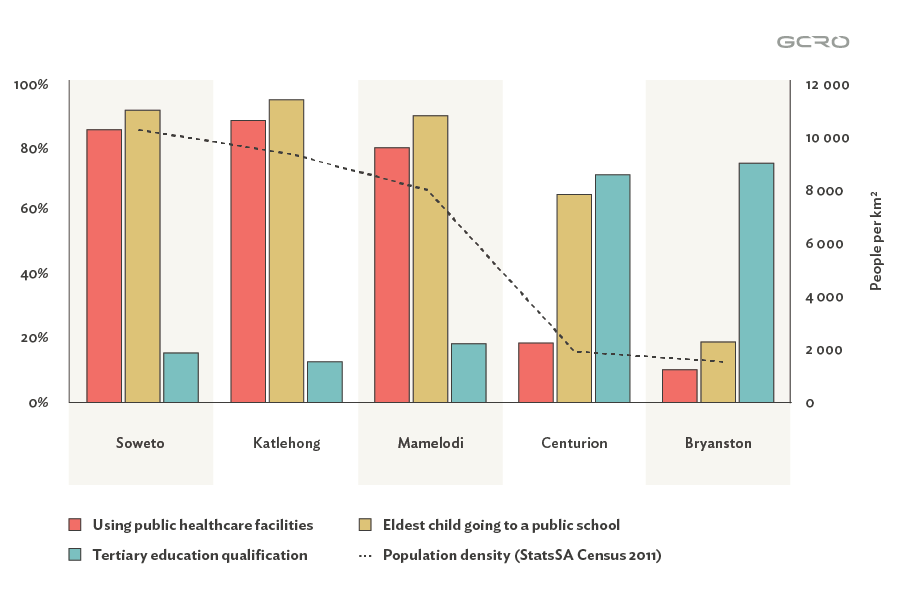 Figure 3: The variation between reliance on public services, relative socio-economic status and population density in selected areas in Gauteng

In general, residents of historically disadvantaged areas are more highly reliant on public schooling than on public health services. This is very evident in the wards around Atteridgeville and Katlehong, amongst others (to compare the maps easily download the PDF version). This trend is not limited to residents of these wards however: overall, 66% of QoL V respondents who used healthcare reported relying exclusively on public health services, while 76% of respondents with at least one school going child reported sending their oldest school going child to a public school. When people begin opting out of public services, they appear to opt out of public health services before public education. This pattern is also evident in Figure 3, with all areas graphed showing greater levels of reliance on public education. The difference between use of public healthcare and public education is particularly striking for those wards selected to represent central Centurion.

These maps highlight the importance of considering where the people using public services live in making decisions about how to resource public services. However, an understanding of where people access services is also critical – and this is an area in which further work is needed. People are mobile and may access services in places other than their residential areas. In the context of Gauteng, with pronounced spatial variations in the quality of public services, this may be exacerbated. We know, for example, that many children in Gauteng travel relatively long distances to attend public schools far from home. We also know that people may be able to access public health services close to home, but instead choose to travel a fair distance to reach preferred public health services, for example in hospitals rather that clinics. However, while the area you live in may not determine where you access public services, it appears to strongly predict whether or not you make use of public services at all.

Opting out of public services

Another striking feature of the maps is the extent to which respondents living in more central and affluent areas have opted out of publicly provided health and education services. Paradoxically, opting out is most prevalent in areas where public services are often objectively better, and levels of dissatisfaction with public services are lower. For example, secondary schools in suburban areas continue to outperform those in historically disadvantaged areas. Public hospital facilities are also disproportionately located in central, more affluent areas.

Figure 4 presents the average proportion of QoL V respondents per ward who were dissatisfied with local public health and education services. The areas with lowest levels of dissatisfaction clearly mirror the areas in Figures 1 and 2 where people have largely opted out of public services. This may reflect the fact that few respondents in these wards make use of public services, and are consequently not able to provide reliable assessments of service quality. But it may also relate to persistent geographical variations in quality. 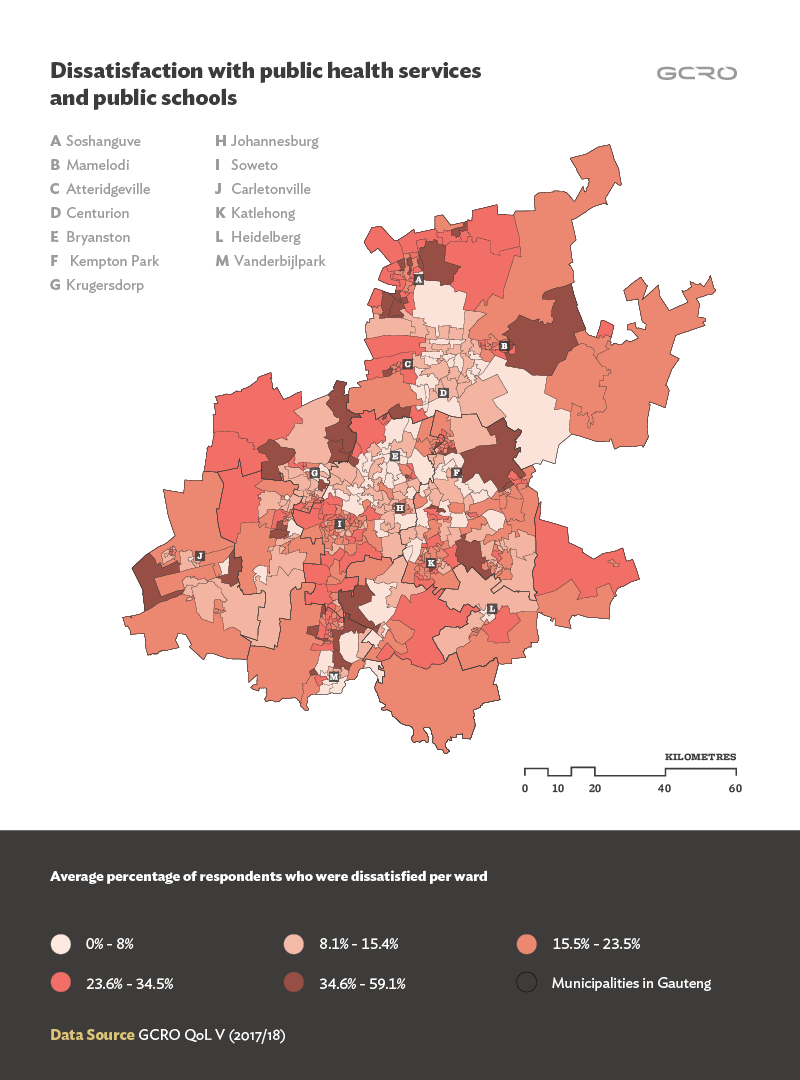 Opting out is also primarily seen in wards with relatively higher levels of educational qualifications, and by extension a higher per capita tax base (for example, those around Centurion and Bryanston, as illustrated in Figure 3). This series of maps highlights the extent of cross-subsidisation, with taxes generated in wealthier areas (quite appropriately) supporting the provision of services to residents of less affluent areas. Some taxpayers may go as far as arguing that they shouldn’t be paying for services they don’t use. On the other hand, many individuals who are able to afford private services accept the redistributive function of taxation in South Africa, and recognise the need to fund public services that they do not use (Inchauste et al 2015). In either case, however, the people who contribute the most funding to public services are not those most likely to be the primary consumers – and consequently unlikely to be highly invested in the level of service delivered. According to some literature, more educated and affluent individuals can be very effective in challenging poor service delivery (Chatterjee 2004). Consequently, the disengagement of this group from the use of public services has significant implications for accountability around the provision of high quality services.

The decision to use private sector services can typically be assumed to be an active choice, given the costs involved. By contrast, there is often a tacit assumption that the use of public services is limited to individuals who have no alternative. However, some of our data suggests otherwise. For example, evidence from QoL IV suggested that some people with medical aid do still choose to make use of public hospitals because they perceive them as providing the best quality of care. Similarly, some public schools are still attractive to relatively affluent families, whether because of language of instruction or perceived quality of education. This is particularly evident in the wards around Centurion in Figures 2 and 3. Given the generally high cost of private education, a reasonably well performing public school still offers a cost-effective option for many relatively well-off families.

Chatterjee, P. 2004: The Politics of the Governed: Reflections on Popular Politics in Most of the World. New York: Columbia University Press.

Edits and comments by: Richard Ballard and Graeme Götz

(A revised version of Figure 4 was uploaded 22 July 2019. It reflects new category breaks as a result of a recalculation but the map itself does not change)