Streets are more than just roads; they are public spaces. While they provide the primary means for traversing a city in one or other form of motorised vehicle, they also create spaces for public urban life where residents can interact with one another in varied ways. When they work as ‘good’ public spaces, streets can enhance urban liveability, sociality and productivity. But when badly designed they can create sterile, unsafe environments typified by hostility, alienation and fear.

GCRO’s January 2018 Map of the Month is part of a broader exploration into the streets of Gauteng, a research project titled Taking Streets Seriously. Our main map, The streets of Gauteng, provides an artistic illustration of the range of different street patterns across the Gauteng City-Region. Based on 2.5m resolution satellite imagery it shows the footprints of built structures in dark grey. The blank spaces represent the ‘open space’ of parking lots, servitudes, parks and golf-courses, railways, water bodies and, mainly, streets. 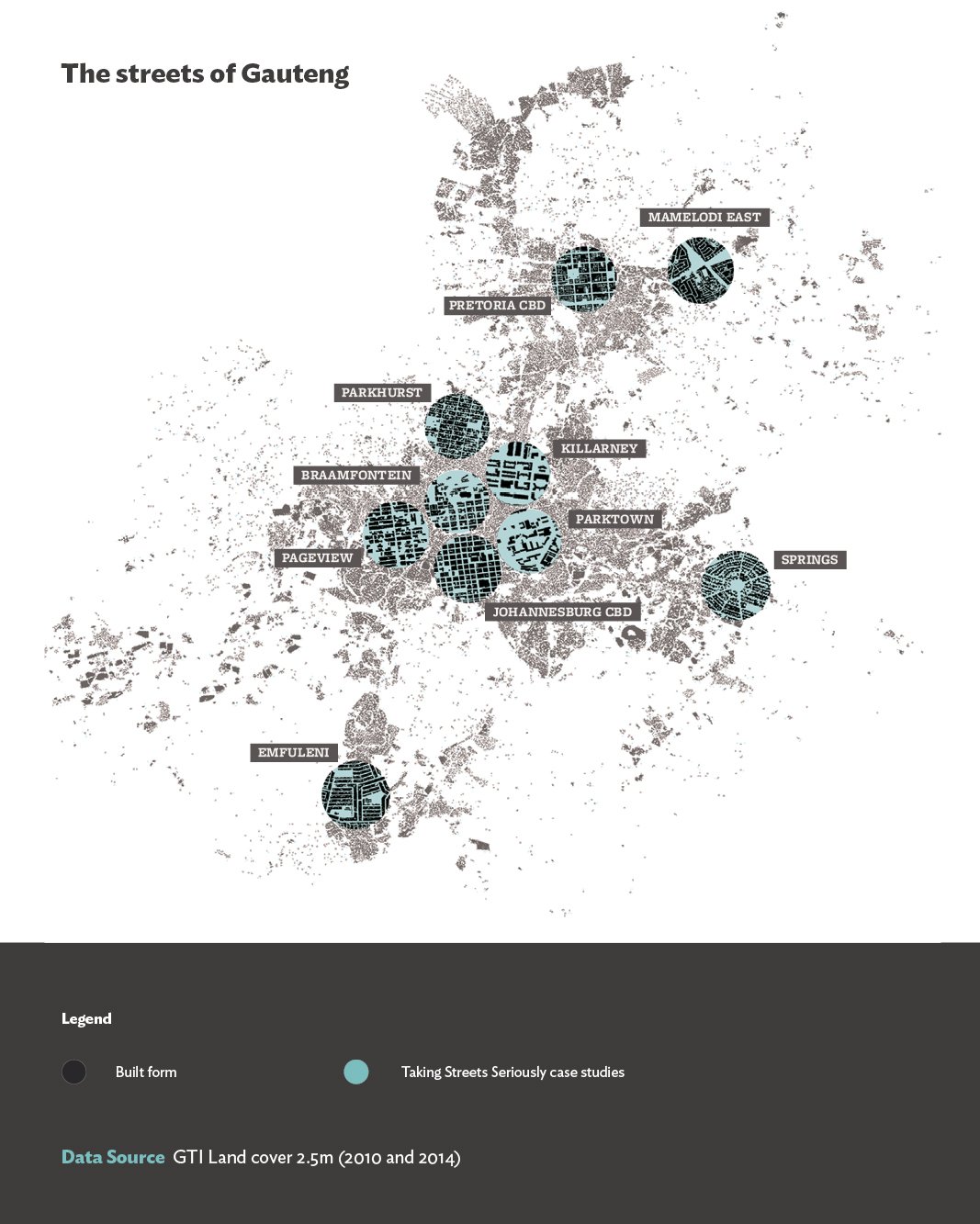 This stark black and white representation of spatial structure is called a ‘figure-ground’. It is quite different from conventional city maps of roads, plots, transport routes and interchanges, key landscape features, or points of interest.

Figure-ground plans depict the built and un-built spaces of the city, using simple black and white markings as the composition for the drawing. … [Their] simple ‘black and white’ depictions allow us to quickly comprehend the urban fabric and the possible density of the city, for a swift (not deep) understanding of the city. Figure-grounds give us an idea of the morphology of the space, allowing us to get a sense of the urban tissue. This type of plan drawing does not really offer an analysis of culture, socio-economic, demographic or the visual quality (aesthetics) of the city, but it can inform us about connectivity and patches of built-form, and perhaps extend speculation on the possibility of improvement and growth. (Amarosa, n.d.)

In their black and white simplicity figure-grounds show very vividly the composition of the urban fabric. They reveal at a glance the function, density, connectedness and key features of a neighbourhood. In our main map, the different street patterns shown across the circles illustrate very clearly the great diversity of neighbourhood forms and characters that make up our city-region.

Gauteng’s streets are complex spaces. On the one hand they were almost universally designed with a view to facilitating the movement of vehicles. Yet our research also unearthed a complex interplay of actors in both the past and present use of Gauteng streets, with street users, property owners and the state each operating according to their own, diverse agendas, contingent on the particular street in question. The result is streets that are chaotic, contested, and changing over time – and where, despite the dominance of cars, pedestrian activities proliferate. While indubitably car-centric, they were nonetheless sites of diverse and vibrant pedestrian, and otherwise non-motorised, life.

On the other hand, streets grid layouts were designed very differently across the city-region. In some places they were designed with the intention to control populations as part of the security apparatus of the apartheid state. In other places they were laid out to maximise the number of street corners. Elsewhere, little thought was given to street network density at all, as private developers sought to assemble large blocks of land on which to build internally focused gated communities insulated from the surrounding urban fabric. In yet other areas, street grids of a sort have evolved spontaneously and haphazardly as an after-effect of the unauthorised and informal occupation of land. These divergent design intentions have in turn had differential effects on the tapestry of street life in each location.

The figure-ground below covers the central business district of Johannesburg. The heart of the CBD is shown with the number (1). It is separated from the more recent commercial area of Braamfontein to the north (2) by ‘Johannesburg’s river’ – a set of train tracks, five in parallel at their widest (3) – running west to east and and then curving south-east. They visibly divide the inner city, with the enormous Park Station the only apparent break. The commercial core is bounded to the south by the notably different grid of industrial Selby (4); to the north by high-density residential areas of Hillbrow and Berea (5); and, west of where Main-Reef Road meets the river of rail (6) and also Ellis Park (7), by a sweep of low density suburbs.

Overall the figure-ground illustrated the conventional orderliness and built density of a typical CBD, with an evident lack of parks and other open space. On a closer look the figure-ground reveals some of the odd quirks of history in the design of this street-grid, which still impact its functioning today. Notice the strange kink in the grid just north and east of the (1). The first official demarcation of stands in what is today the Johannesburg inner-city occurred in 1886, shortly after the discovery of gold, to bring some kind of order to a booming mining camp. The camp had been split in two by a block of mining claims running east-west, belonging to the Randjeslaagte Syndicate, and so the stands were demarcated in two separate portions. When the the Randjeslaagte claims proved unviable, and this land was surveyed in 1887 to join the two portions laid out the year before, the surveyor found himself having to work with two different block sizes that did not seamlessly connect. The result is an odd shift in the grid where the two portions met. In this early grid design the surveyors also set out to create as many street corners as possible, because corner stands had the highest lease value – the smaller the block sizes, the more street corner stands, the more revenue for the state leasing the land. The result was a very tightly knit grid (Beavon, 2004). Back in the mid-1880s these street designs would not have had to consider the movement of motor vehicles. Today, the tight grid and its odd kinks seriously hinder traffic flow just north of the (1). Coupled with intense pedestrian use and street trader activity this has given some to name this part of the inner city ‘the chaos precinct’. 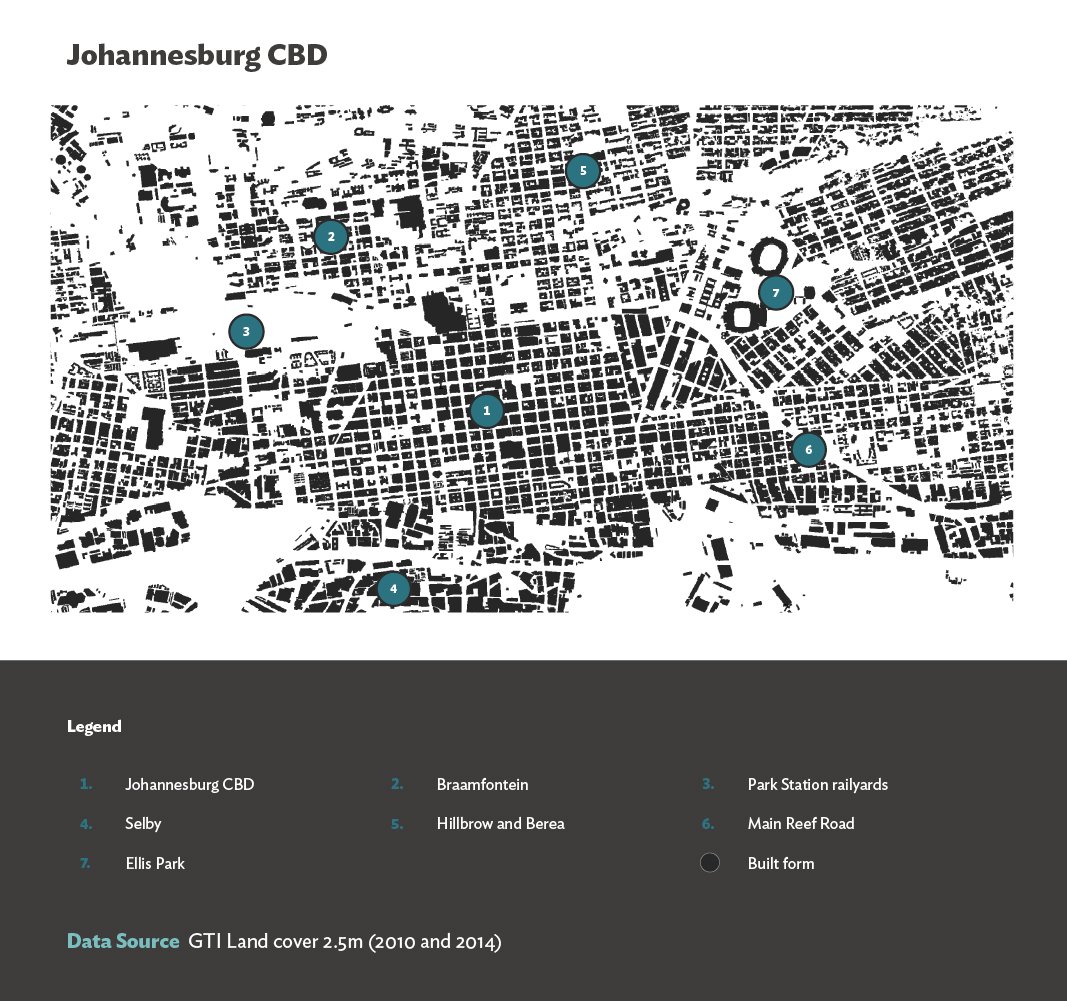 Mamelodi was created by the apartheid government in 1953. Today it is structured by the curve of Solomon Mahlangu Drive (1) and the railway tracks along its southern edge (2). It was first laid with just a small number of houses on large formal stands, typified by Mamelodi Gardens (4). Over time these stands have increased dramatically in density as residents have extended homes and built backyard structures, usually for rental income. With rapid urbanization, Mamelodi expanded eastwards, with a range of settlement forms that are visible on the figure-ground below. Particularly noticeable are the more haphazard grid patterns of informally occupied land at Stoffel Park (5) – where shacks have crept gradually up a steep ridge – and Phomolong informal settlement (6). Some of these areas have been formalised over time with smaller RDP plots, or bounded by low cost bonded housing developments, such as at Mahube Valley and its extensions (8 and 9). The extraordinary diversity of street patterns in this figure-ground speak to a rich layering of types of formal and informal settlement, at varied stages of development. 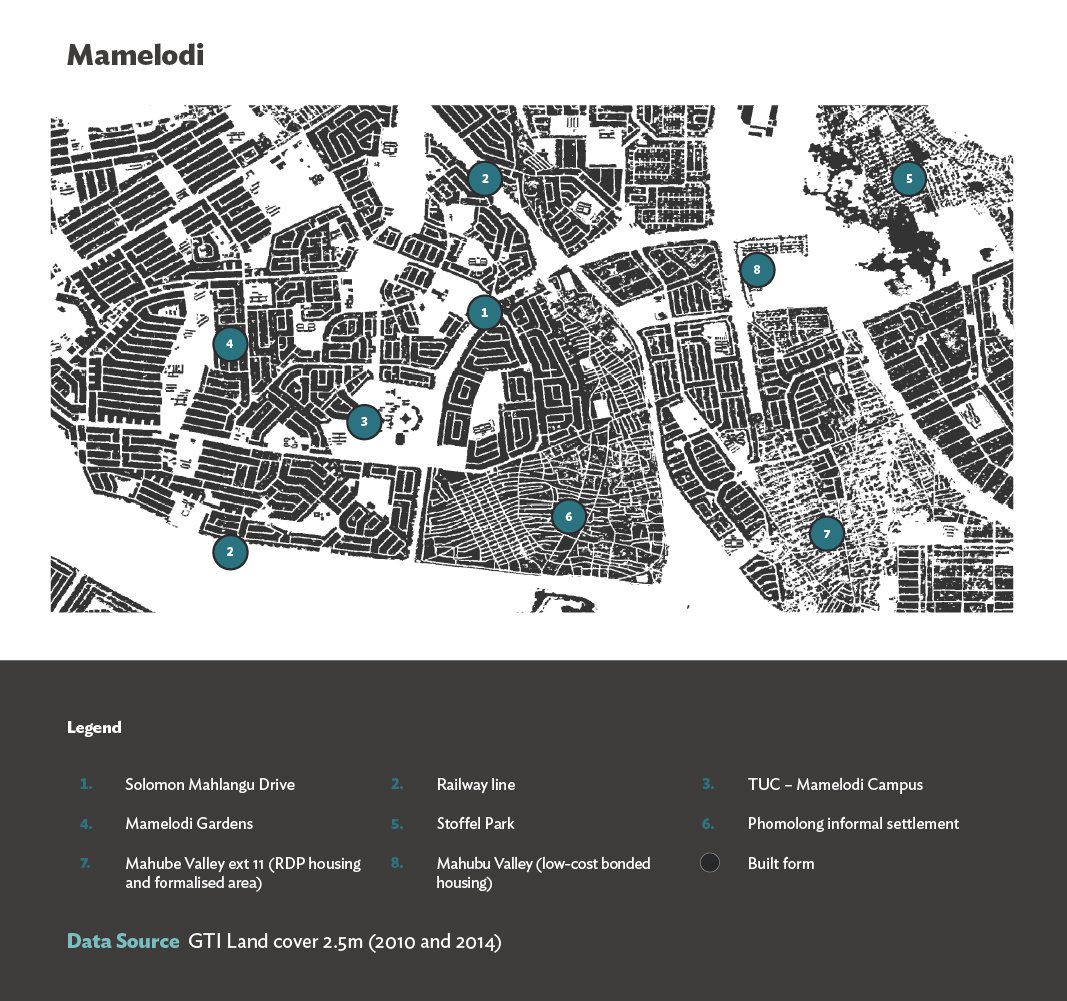 The figure-ground below is of Johannesburg's northern suburbs. Here we see more urban space structured by abundant green space. In the east is the Parkview golf course (1); in the centre the the Zoo and Hermann Eckstein Park (Zoo Lake); and to the west is the Killarney Country Club alongside the M1 Highway. The figure-ground shows how the proliferation of freestanding houses and pavilion buildings create ill-defined street edges. Even the higher-density apartment blocks of Killarney (4) float within the block rather than defining the edge, as we saw in the higher-density CBD and Mamelodi. The sole exception is the thriving commercial node of Rosebank (7). What we cannot see here are the high walls and fences that aggressively mark the suburban street edge, and so the figure-ground suggests a more porous experience of these streets than is the reality. This is so across all the suburbs covered by the diagram, even where their plot sizes differ to make neighbourhoods of different characters such as Parkwood (5) and Parkhurst (6). 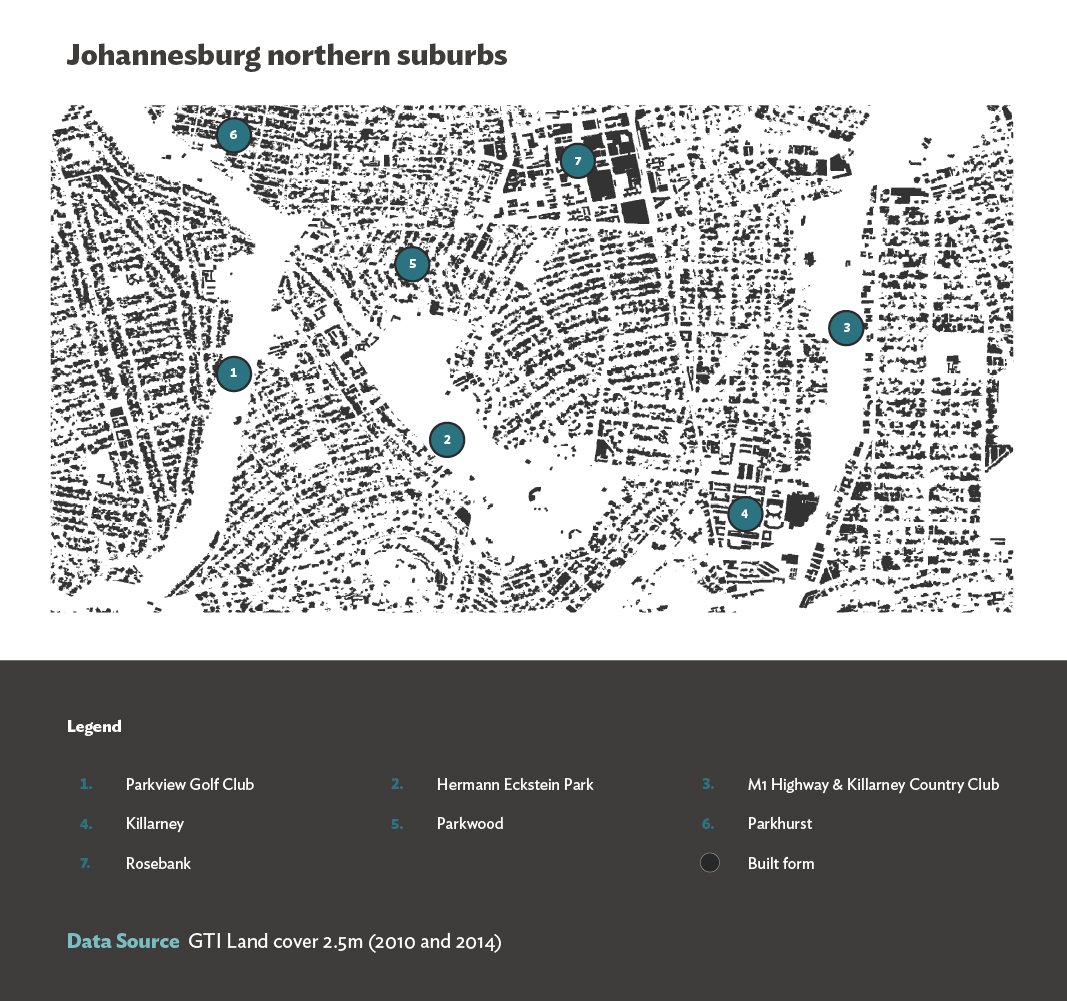 These figure-grounds – of buildings in black and negative space between – stand as a deliberately ironic comment on how streets are typically considered. It is the central point of our research that what makes a ‘good’ street goes far beyond the road surface and its associated infrastructure. Gauteng’s streets have enormous potential to serve their diverse users better, but doing so will require a change in mindset on the part of urban designers, and others investing in our streets – to fundamentally re-frame the street as a positive space in its own right rather than as a negative space between buildings.

Beavon, K. (2004). Johannesburg: the making and shaping of the city. Pretoria: University of South Africa Press.