As part of its mandate, the GCRO continuously strives to expand data analysis and visualisation, as well as reach new audiences. Our applied research speaks to a wide range of actors and audiences with varying degrees of specialist and general knowledge. Our work is received and sought both locally, within the context of the Gauteng city-region, and internationally. The GCRO employs a variety of strategies to disseminate research and insights as widely as possible. The December 2017 Map of the month depicts how people from around the world have actively engaged with GCRO data and content in thinking through the application of our research in very different locations.

The first map illustrates that the primary means of research dissemination is through our website, where all of our outputs can be accessed freely. The map shows the range of countries from which people have accessed the GCRO’s website since our second generation website was launched in 2015. The website has developed into a rich archive of resources that is constantly evolving through new research outputs. This year alone GCRO published 2 research reports, 2 occasional papers, 1 data brief, 12 maps of the month, 1 vignette and over 30 academic books, book chapters and journal articles. To make sure people don’t miss our outputs, we are growing our social media presence – this year we gained over 300 followers on Twitter and we encourage you to follow us there, like our Facebook page and take a look at our new Instagram account. 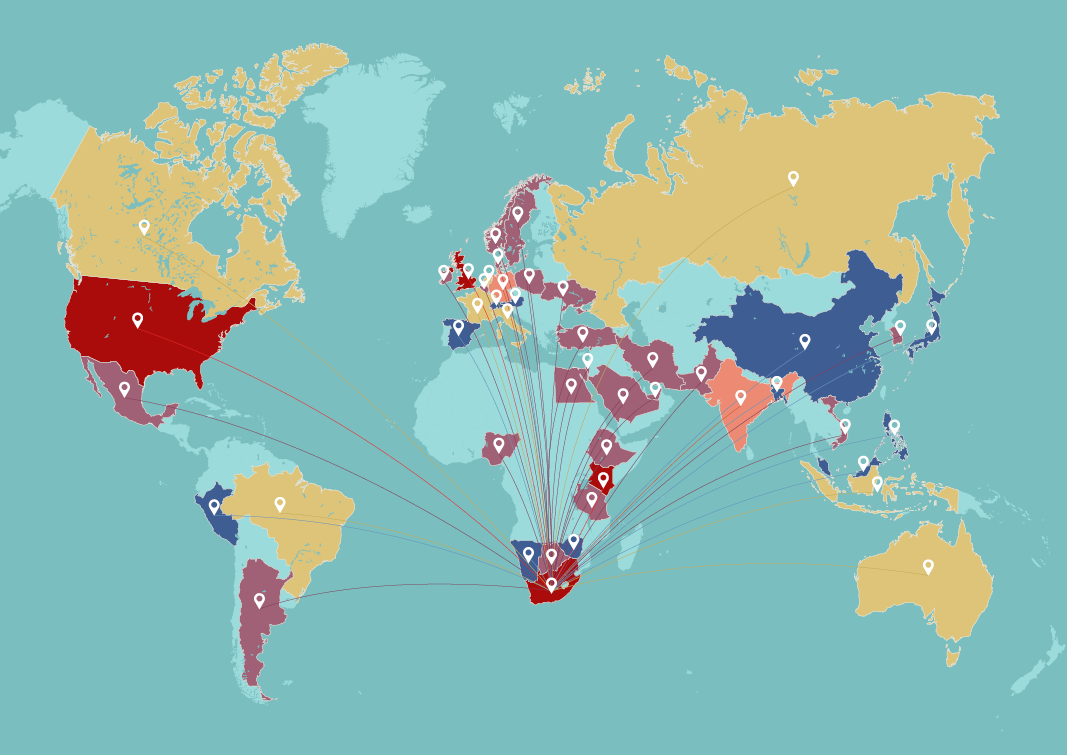 2017 also saw the commencement of fieldwork for the fifth iteration of the biennial Quality of Life (QoL) Survey. The QoL survey is designed to provide frequent understanding of the socio-economic circumstances, satisfaction with service delivery, psycho-social attitudes, value-bases, and other characteristics of residents in the Gauteng City-Region. The survey, because of the sample size and breadth, spatial dimension, and quality of analysis, has a considerable impact on government’s work, academic analysis as well as enjoys significant media coverage. Open data access is a key concern, and GCRO believes it has an important role to play in helping to make policy-relevant data available and as accessible as possible to a range of stakeholders. The raw data from each QoL survey is freely available in both raw and analysed forms. The raw data is accessible directly through the GCRO on request or via the University of Cape Town’s DataFirst data portal. The second map depicts the QoL data requests directed to GCRO across each of the past four surveys. While the datasets have primarily been requested by researchers in South Africa, a significant number of academics outside of the country have used the QoL data for their research. This map shows that within South Africa QoL data requests extend beyond academia, into government and other sectors.

Both of the maps presented in this Map of the Month were developed as part of GCRO’s Shifting Borders and Building Bridges exhibition at the 2017 Seoul Biennale on architecture and urbanism, held in South Korea. This exhibition curated a range of GCRO research into a series of four story maps, accessible from the GCRO website. The exhibition is part of our vision to expand our repertoire of data analytics and visualisations to engage with a broader audience. In addition, this year we produced an explainer video on Green Infrastructure in the GCR and the interactive website 'Gauteng as a village of 100 people', which has been featured in several media focussing on data visualisation.