The February 2016 map of the month shows the performance of Gauteng’s secondary schools during the 2015 National Senior Certificate (NSC) examination. This should be read together with a GCRO vignette on the same issue, please view the link below.

Map 1 (below) provides a spatial perspective on both individual school performance and across school district average performance during the NSC examinations. 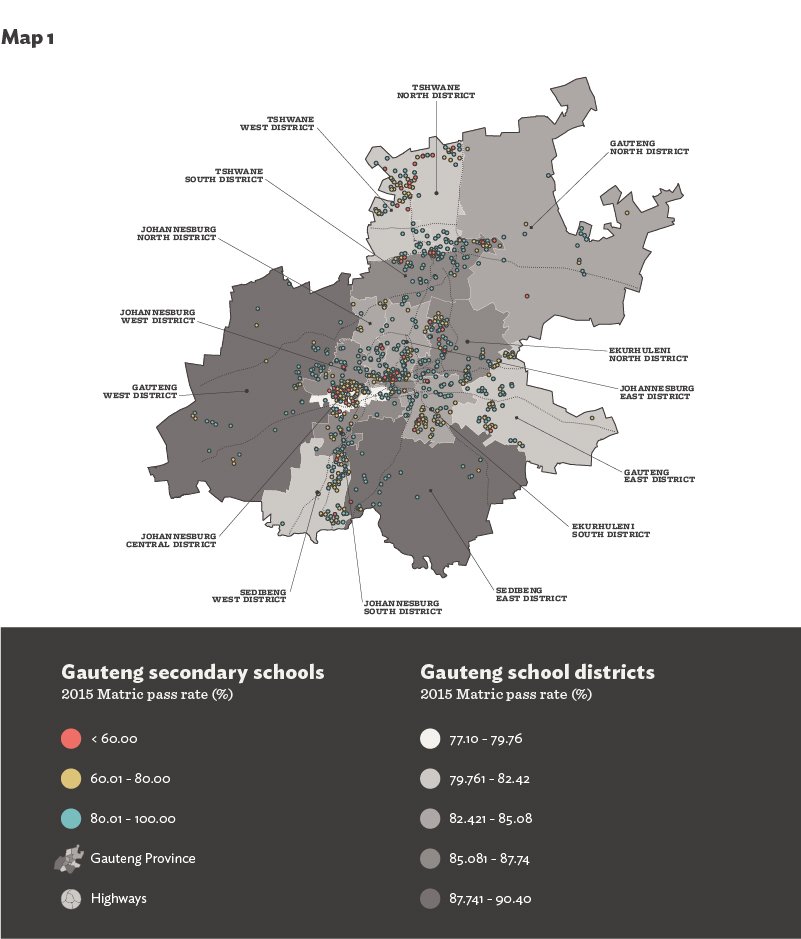 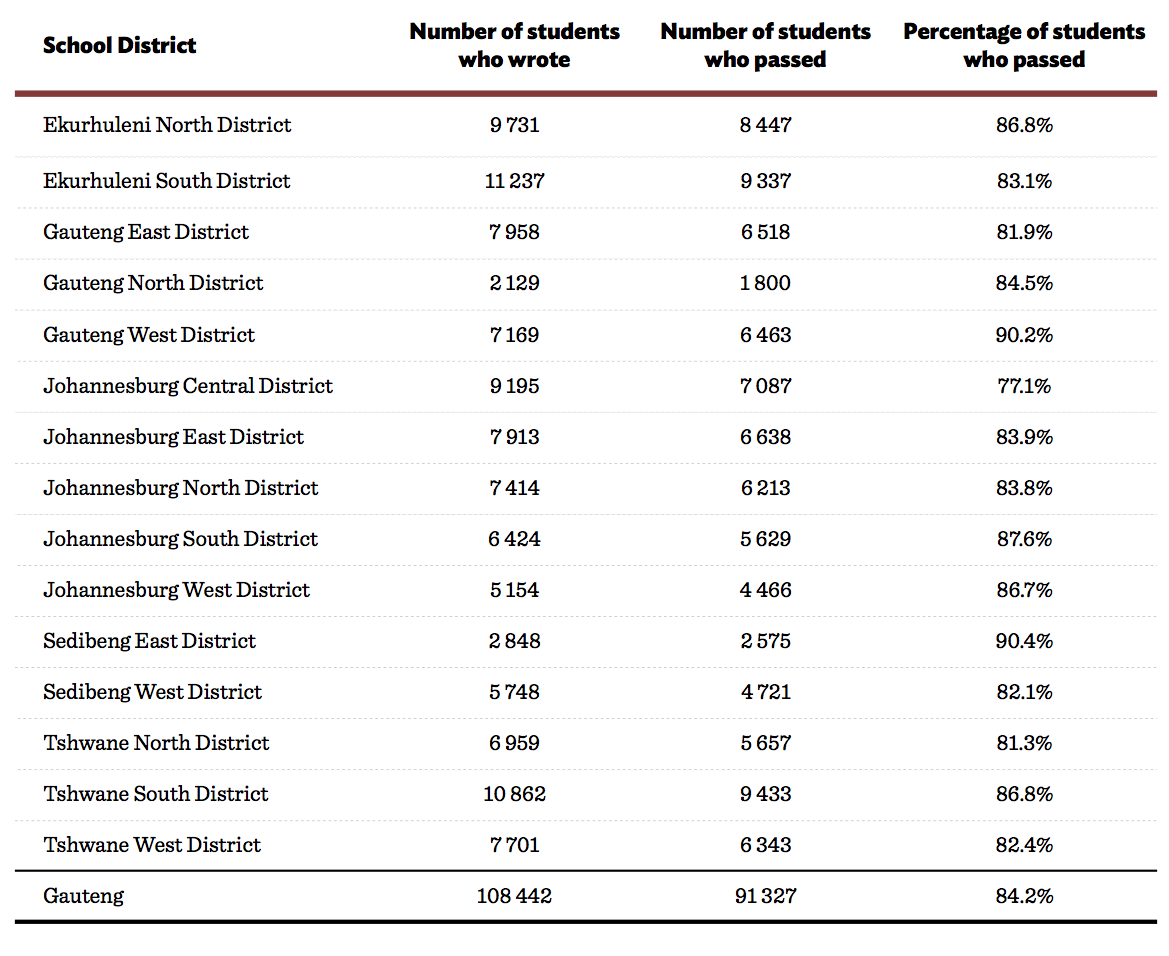 The performance of individual schools in Gauteng (based on the pass rate per school) was overlaid onto the school district performance to provide further insight. Table 2 (below) simplifies this data, showing the number of schools in a set of pass-rate brackets. More than two thirds of the schools perform very well, while only a minority (6.9%) have pass rates below 60%. A quarter of Gauteng’s secondary schools have pass rates between 60 and 80%.

What are the reasons for the spatial differences in the performance of schools across Gauteng?

One possible explanation is the preponderance of different types of school in different areas. As the accompanying vignette demonstrates a large proportion of schools in the Johannesburg Central District are no fee schools, and these have lower pass rates on average than other types of schools.

Many poor performing schools are located in areas such as townships or and in inner city areas (Also see Map 2 for a more detailed picture of the poorly performing Johannesburg Central district). This implies a sorting process in which successful schools in areas perceived to provide better schools are able to reinforce their success over time by attracting better performing and better resourced learners. Learners sometimes travel great distances each day in order to attend a better school. In turn unsuccessful schools deter such learners, and areas perceived to provide poorer educational opportunities decline further (Hunter 2010). The poor performance of some schools is, in this way, directly connected to the good performance of others.

It is intriguing that the Gauteng West District, one of the poorest areas of the province, has one of the highest pass-rates at 90.2%, and the Johannesburg Central District has the lowest at 77.1%. The second is less peripheral, and the two Districts have an almost identical profile in terms of type of school. Clearly the virtuous and vicious cycles experienced by districts and individual schools are further shaped by other factors, such as district and school management, staff capacity, fee structures, and so on. 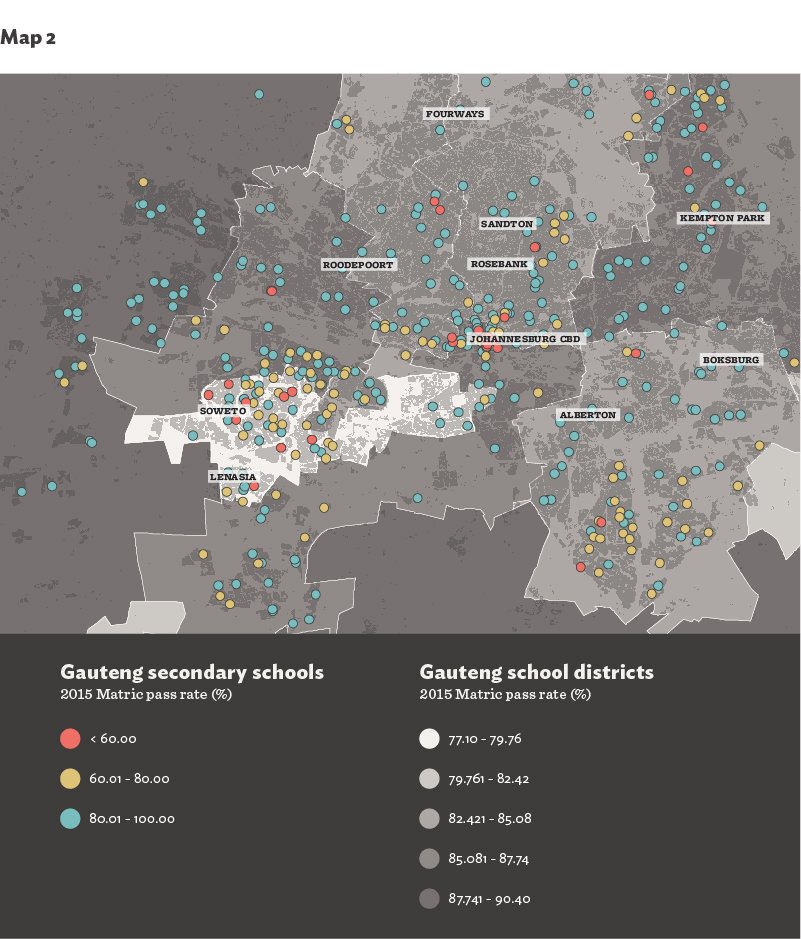