In April 2015, the Gauteng Provincial Government (GPG) launched a new policy entitled ‘Mega Projects: Clusters and New Cities’ led by the Department of Human Settlements. This policy signals a shift away from the RDP housing model towards large scale integrated human settlements. The policy defines Mega Projects ‘as projects with a yield of no less than 15 000 units either as an existing development cluster or as a new nodal development project.’

This map of the month plots three layers of information. First, it shows the distribution of the unemployed population of Gauteng based on Census 2011. Each grey dot represents 100 unemployed people. Second, it maps the distribution of existing businesses in the form of a hot spot density layer – the deeper the red shading the greater the number of businesses per square km (derived from the 2010 AfriGIS bizcount point data). Third, it indicates the location of the planned Mega Projects (in blue dots). The size of the dot represents the proposed size of the project, with some such as Syferfontein projected to have as many as 60 000 housing units. Note that the mapping of these planned developments is approximate, based on GCRO’s interpretation of the locations listed by the Premier of Gauteng in his February 2015 State of the Province Address (SOPA).

This map illustrates two important spatial considerations. First, current concentrations of unemployed people are far away from current concentrations of businesses. As a result it is difficult for unemployed people to physically look for work, and if they are able to secure work they often need to spend a great deal of time and money commuting from home to where their jobs are. The Mega Projects policy is therefore correct to point out that current spatial arrangements are not working in favour of large populations of marginalised people.

Second, the proposed Mega Projects are relatively near to populations of unemployed people but are also, therefore, far away from current concentrations of businesses. The Mega Projects policy is mindful of the need for ‘economic sustainability’ and intends to create ‘economically self-sufficient cities’. If the Mega Projects do indeed prove to be economically self-sufficient, then their residents will be able to commute locally to work, and large pools of unemployed people in established townships and informal settlements nearby will also have more work opportunities closer to home. However, if Mega Projects are not successful in generating economic activity internally they will place many more people on the outer edge of the existing urban extent even further away from where most of the jobs are.

GPG’s policy shift can be located within a broad debate on approaches to spatial development both internationally and in South Africa. On one hand, many urban planners emphasise the need to improve existing settlements through densification, especially in mixed-income and mixed-use nodes and along mobility corridors. In South Africa, there has also been a stated commitment to reverse apartheid through infill development in the areas that separated racially segregated suburbs.

On the other hand, there are various experiments globally with edge city development in an effort to respond to high levels of urbanisation with well-designed new settlements. South African’s human settlement policy appears now to be sympathetic to this approach. As a grand experiment it may work, although much depends on the achievement of economic self-sufficiency. According to those who favour the first position in the debate (the infill and densification of existing human settlements), the Mega Project approach runs the risk of exacerbating sprawl, overstretched infrastructure networks, unsustainable consumption of resources, spatial fragmentation and dislocation.

There is a fallacy, perhaps, in understanding this debate as a choice. Edge development and densification invariably do occur simultaneously. The challenge is to better understand, plan for and manage the complementarity and contradictions between these two processes. 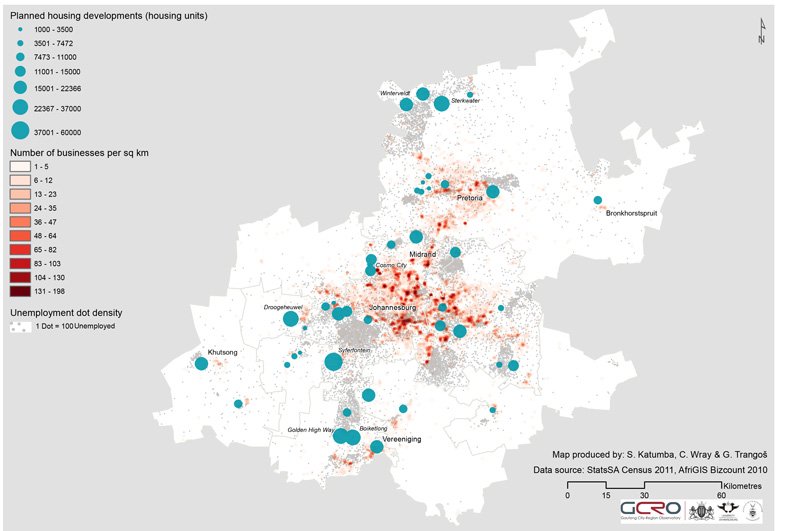