April’s map of the month illustrates the percentage of respondents per ward satisfied with the performance of local government. The mapping is derived from the 2013 Quality of Life (QoL) survey, which asked respondents: “How satisfied are you with the performance of the [respondent’s] local municipality?” The results – with satisfied and very satisfied responses combined – are mapped per ward using natural breaks in the data (which explains the decimal points). Ward 74804015 was excluded due to only four respondents being interviewed in this ward.

Satisfaction varies across the Gauteng City-Region (GCR), with the highest levels of satisfactionwith local government performance (shaded green in the map) mainly located in the core of the GCR. The areas with a visible clustering of high levels of satisfaction include Vosloorus and Alberton south areas in south western Ekurhuleni; Sandton through to Midrand in Johannesburg; wards south of Pretoria (Garsfontein), Centurion south and Mabopane/Soshanguve wards in Tshwane; as well as a few wards surrounding Carletonville (Merafong City) and Meyerton (Midrand).

In contrast, there are a number of wards with low levels of satisfaction (shaded red in the map) scattered throughout the GCR, visibly clustering in Khutsong (Merafong City), the Bekkersdal area (Westonaria) Randfontein and Krugersdorp (Mogale City) in the west; the majority of wards in Emfuleni; central Germiston, Daveyton and the Ekurhuleni/Lesedi border in the east; and Atteridgeville and Winterveldt/Hammanskraal wards in Tshwane. The highest levels of dissatisfaction are concentrated in the Emfuleni wards, as highlighted in the municipal-level September 2014 map of the month.

As part of GCRO’s Quality of Life (QoL) survey spatial statistical modeling project, further analysis employed the model builder in SPSS, the Spatial Error Regression (SER) model in GeoDa and exploratory regression in ArcMap using the percentage dissatisfaction with local government performance per ward as the dependent variable. The analysis identified five significant “best” predictor QoL survey variables that are assumed to contribute towards respondents’ dissatisfaction with local government performance. The “best” predictor variables are as follows: percentage dissatisfied with dwelling, mean sense of safety (index score), percentage agree the country is going in the wrong direction, percentage think lack of maintenance is the biggest problem facing the community, and percentage agree politics is waste of time.

A detailed report on the analysis and results will be available in the upcoming data brief to be released in the next few months. 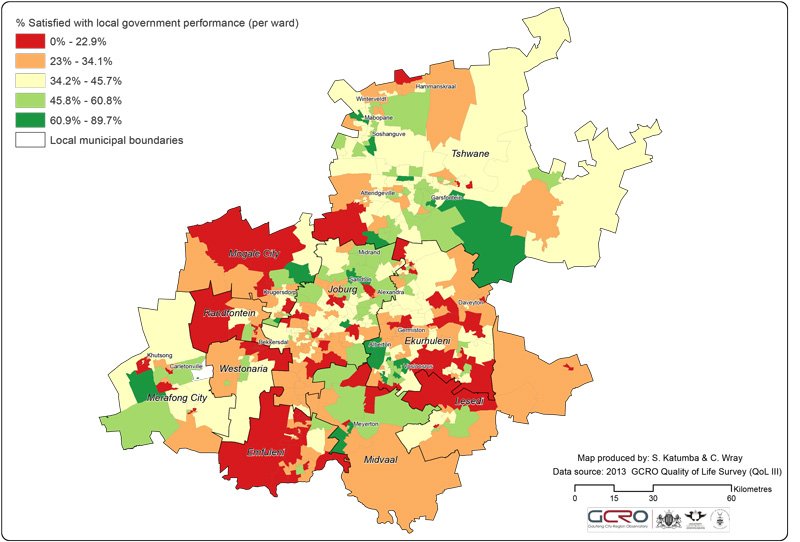