South Africa in general, and the Gauteng City-Region in particular, are grappling with rising service delivery protests and increasing levels of dissatisfaction with government performance. Municipal IQ’s Hotspots Monitor database, which captures major community protests staged against a municipality as documented by the media or other sources in the public domain, reported a record number of service delivery protests in 2014 – 185 from January to November – with Gauteng recording the most protests (Municipal IQ 2014). These findings correlate with the civic protest barometer which recorded an all-time-high of 218 protests in 2014 (Powell et al., 2015). A civic protest in the barometer refers to organised protest action within a local area directly targeting municipal government, or as a means to express grievances against the state more broadly. Over half (52%) of the grievances raised by protestors related directly to municipal services or issues of municipal governance. Only 10% of the protestors’ grievances related to non-municipal services (such as schools and policing), indicating that municipalities may be considered by protestors as a proxy for the failures of higher tiers of government (Powell et al., 2015).

GCRO’s 2013 Quality of Life (QoL) survey asked each respondent if he/she had participated in a service delivery protest in the past year, with 4% (or 1 089 respondents) taking part in protests. (Note: this refers to 12 months over the 2012/2013 period, since the field work took place in the latter half of 2013.) Of these respondents 63% were dissatisfied with the performance of local government compared to 56% dissatisfied with provincial government and 55% dissatisfied with national government. This month’s map depicts the location of respondents that participated in service delivery protests. Although this is not necessarily the location of the actual service delivery protest, the map reveals some interesting results. For example, Bekkersdal has experienced a number of violent service delivery protests since 2013 and is a clear hotspot on the map. Other locations where hotspots are discernible include Tembisa (Ekurhuleni), Saulsville and Mamelodi in the City of Tshwane and Diepsloot in the north of the City of Johannesburg. The mapping was obtained from executing the ‘Point Density’ tool in ArcMap, which computes a value (hotspot) per unit area from neighbouring points at a given cell. The cell size was set to 30 m and the radius to 750 m.

The service delivery protest question will be repeated in the 2015 Quality of Life survey, with a follow up question asking what the protest was about. The 2015 survey is currently in field aiming for a 30 000 ward representative sample and will hopefully provide a more detailed insight and analysis around the reasons for service delivery protests. 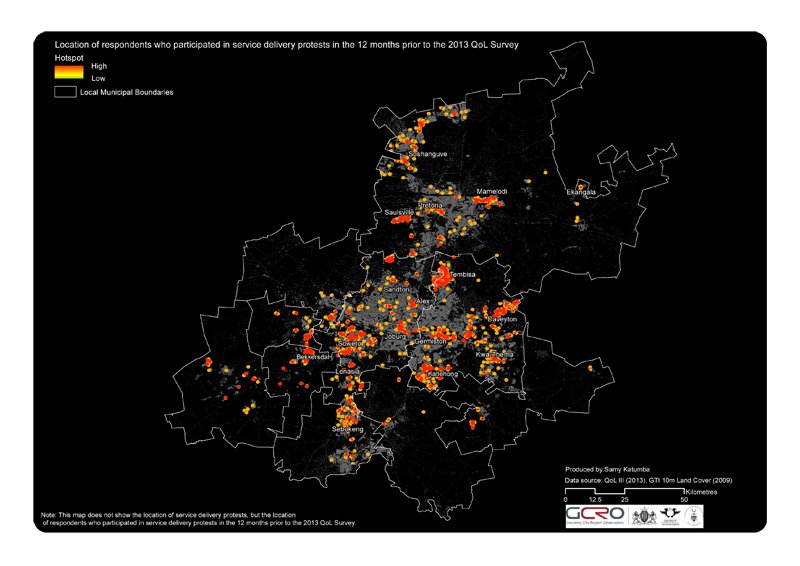