This month’s map has been compiled for October transport month, and is one of three linked outputs on the to-work trips made by residents of the Gauteng City-Region. It should be read in combination with this interactive visualisation and this vignette. The map shows the flow of transport trips to work across the GCR, categorised by race. The mapping was derived from the 2013 Quality of Life (QoL) survey, which asked respondents to “think about the trip that you make most often that involves walking or cycling or other mode of transport such as a taxi, car or train”, and then choose the purpose, i.e. to go to work, to look for work, to go shopping, etc. Using the geographical location of households at which individual interviews were conducted as starting points, and the destination subplaces (suburbs) as end points, straight lines showing transport trips to work were drawn (i.e. not all trips are shown, merely work trips).

A categorisation of transport trips by race (Africans shown with blue lines and whites with red) reveals the legacy of apartheid geography. Trips made by white respondents (1048 trips) concentrate at the centre of the city-region, while trips made by African respondents (5423 trips) originate from a much wider area on the periphery. Surprisingly, despite these differences, the average (mean) straight line distances travelled to work were the same for both races (14km). As shown in more detail in the interactive visualisation, this reflects a rather surprising distribution of local and longer distance trips by both races. The city-region is still patterned by a greater percentage of white respondents having shorter trips to work, compared to the long distances travelled by African respondents from areas on the fringe of the GCR, such as Soshanguve, Orange Farm and Daveyton, However, remarkably, a larger percentage of white respondents travel more than 25km to work than African respondents, equalising the two averages. There is a trend here — possibly explained by the massive development of new gated housing estates and townhouse developments on the urban edge to which the middle-classes are retreating — that deserves further investigation. 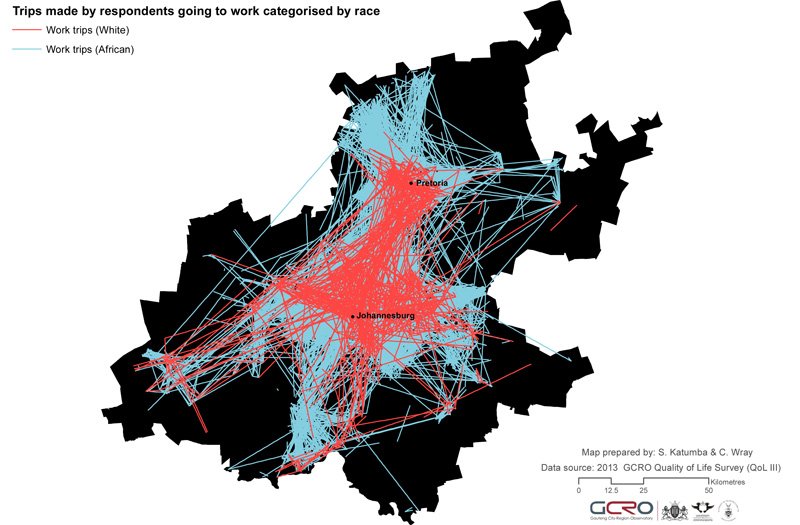