Although Gauteng is South Africa’s smallest province by area, covering approximately 18 179km2, it is home to over 12 million people (Census, 2011). According to the StatsSA 2013 mid-year population estimates, the population stands at 12 728 438. In both 1996 and 2001 KwaZulu- Natal was the largest province, in terms of population size. Today, Gauteng has the largest population of all the provinces, with over two million more people than KwaZulu-Natal. In 1996, Gauteng constituted 18,8% of the South African population, in 2001 20,9%, and 23,7% in 2011. Using data from Census 2011, this map compares Gauteng’s population to other areas with similar-sized populations, by aggregating South Africa’s provinces into hypothetical areas with population sizes roughly equivalent to Gauteng. Gauteng’s 2011 population of 12,3 million is bigger than KwaZulu-Natal (10,3 million); or the combined populations of the entire Mpumalanga and Limpopo (9,4 million); or Eastern Cape and Free State (9,3 million); or Western Cape and Northern Cape and North West (10,4 million). Note: this South African version is based on a map that splits the United Kingdom into areas with a London-sized population (see bit.ly/1lrANvqand imgur.com/PKSvQXW). 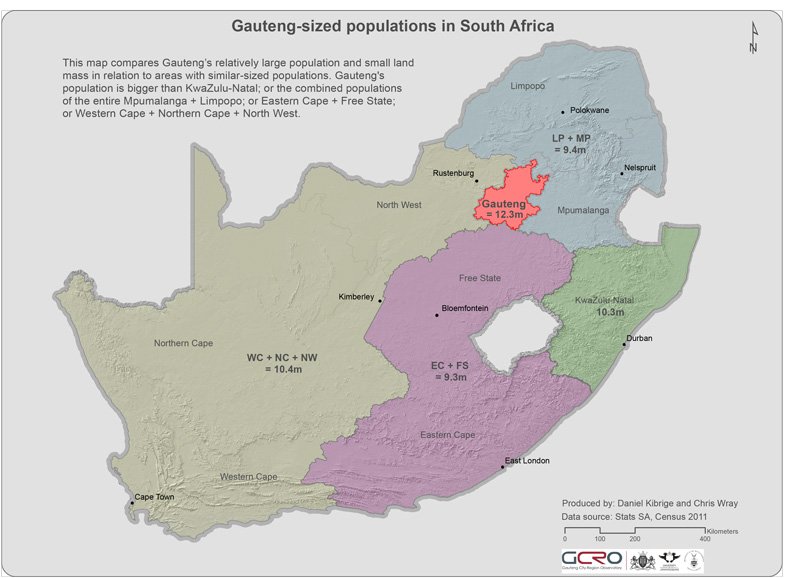