In general, cities exacerbate climate change because they emit more carbon than they capture and store. Given this, a number of cities around the world have committed themselves to achieving carbon neutrality over the coming decades (e.g. see Carbon Neutral Cities Alliance). In order to achieve this they will need to (1) reduce their carbon emissions, and (2) offset remaining emissions by ensuring that carbon is stored rather than released into the atmosphere. Gauteng's municipalities have also made commitments to achieving carbon neutrality as part of this global drive (e.g. City of Ekurhuleni 2015, City of Johannesburg 2021, City of Tshwane 2021). In order to track progress towards this goal, it is necessary to measure the city-region’s stored carbon. In this Map of the Month, we explore the way in which satellite imagery can be used to calculate the city region's 'green carbon', or the carbon stored in plants.

The key driver of climate change is that carbon is being released into the atmosphere as a result of human activity. Cities have many carbon sources, not least because of their extensive use of fossil fuels for energy. One of the ways in which cities can offset the rate at which they generate carbon is by preserving and restoring ecosystems (Mackey et al., 2008). This is because plants can take carbon out of the atmosphere and store it both in vegetation and in the soil. In other words, cities that support healthy ecosystems are not only encouraging habitats for plants and animals but are helping to reduce the quantity of carbon that stays in the atmosphere, and are therefore contributing to the fight against climate change.

In tracking progress towards carbon neutrality, it is necessary to understand the balance of carbon sources and carbon sinks. Carbon sources emit carbon (e.g. carbon dioxide) into the atmosphere (for example fires and the burning of fossil fuels). Carbon sinks store carbon in a stable state within the earth’s biosphere (for example wetlands, grasslands and forests) (Alexandrov, 2008). Human activities such as deforestation and unsustainable harvesting, degradation of natural landscapes, and the burning of biomass can turn carbon sinks into carbon emission sources (Viergever et al., 2008). Plants are just one of several types of carbon sinks that can be used to take carbon out of the atmosphere and 'sequester' (capture and store) it. This is referred to as green carbon, and it is the biggest component of the terrestrial (land) carbon sink.

Quantifying types of carbon can play a big role in understanding and monitoring changes to the carbon balance (Valentini et al., 2014; Zinke, 2020). Green carbon estimation can serve as a significant piece of the greater carbon cycle puzzle and help inform land managers and governments working to preserve their existing carbon sinks. Furthermore, the South African government has legal obligations to map and monitor natural carbon stocks as part of its agreement to various international treaties such as the Kyoto Protocol, United Nations Convention to Combat Desertification, United Nations Forum on Forests and the Food and Agriculture Organisation Forest Resource Assessment (DAFF, 2015; DEA, 2010; Main et al., 2016).

Figure 1: Distribution of green carbon in Tonnes per hectare across the Gauteng City Region (GCR) [Click here to download the high resolution version of the Map] 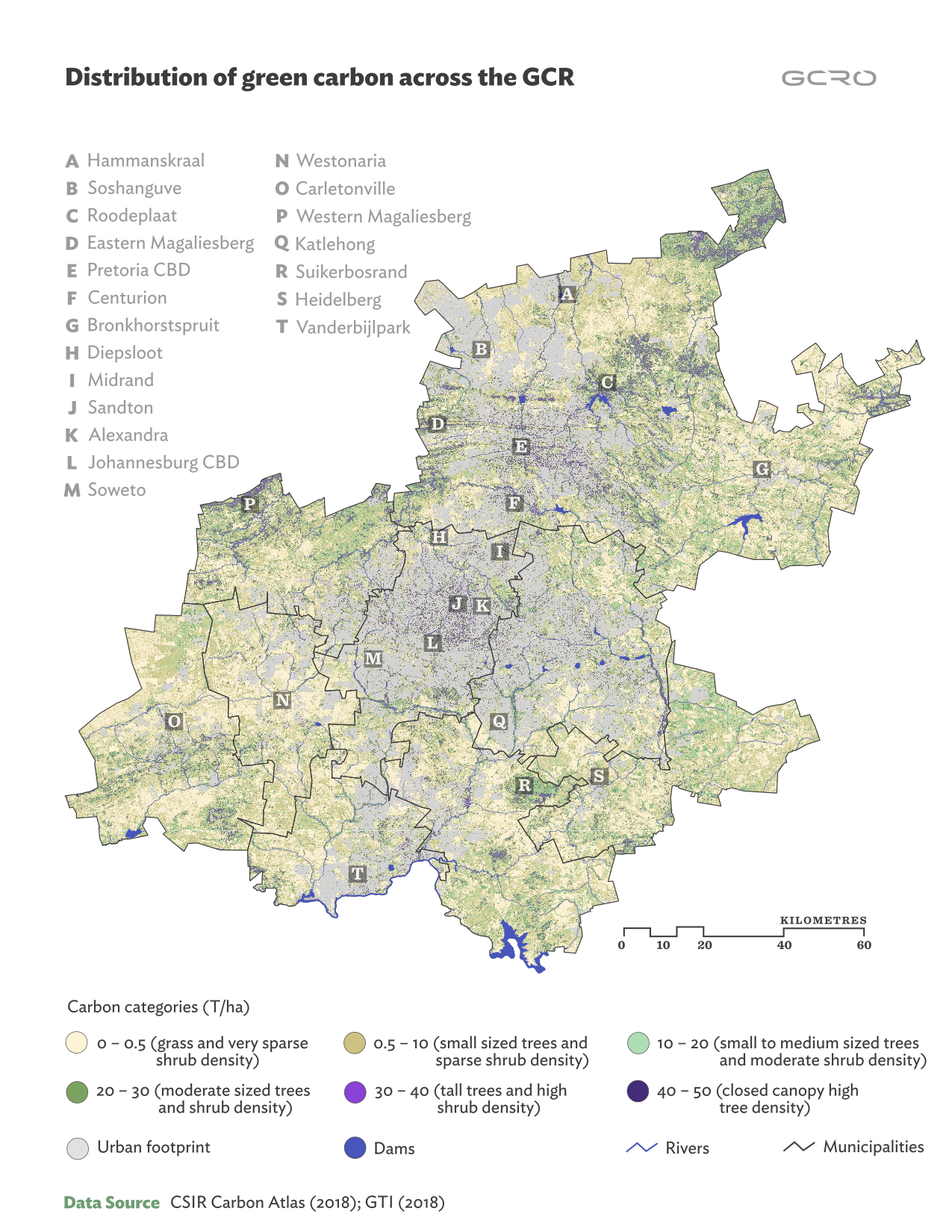 Figure 1 shows the spatial distribution of green carbon measured in tonnes per hectare across the GCR, with mining areas, commercial agriculture, landfills and urban areas and infrastructure being masked out in grey. The distribution of green carbon is highly governed by the current land use practices and degree of land transformation, microclimate, topography, geology and the natural ecological capacity to host green carbon within the municipalities. Broadly, a higher quantity of green carbon is found in the peripheral or peri-urban areas outside main cities than within the city limits (e.g. Bronkhorstspruit (G) and Roodeplaat (C)). The northern half of the GCR contains more stored green carbon than the southern half. This trend is mostly driven by the presence of grasslands in the topographically flat south while the northern hilly escarpment areas have a greater presence of trees originating from the savannah biome of neighbouring provinces (Mpumalanga and Limpopo). Large trees and dense green carbon is found within the Johannesburg’s northern suburbs which were historically planted for beautification purposes but are mostly alien tree species (e.g. Jacaranda). Greater densities of green carbon are also found within protected areas (e.g. Suikerbosrand, R) as well as within river zones (e.g. Hennops and Jukskei rivers). Another area of interest of high green carbon is the Magaliesberg biosphere reserve (P) and mountain range (D) in the north western portion of the GCR which contain the remnants of the Afromontane forest biome in the highveld. The high green carbon values in Suikerbosrand and Magaliesberg implies that protected areas, though small in spatial extent, serve important functions as green carbon sinks. Township and informal areas such as Alexandra (K), Soweto (M) and Soshanguve (B), have high human densities and therefore generally contain lower densities of green carbon. Notably, though, the far reaches of the Magaliesberg mountain ridge extends through the settlement of Mamelodi which brings higher green carbon sink values than other settlements.

Figure 2: Total sum of green carbon per Municipality in Tonnes per hectare normalised by hectare (left) as well as the percentage contribution to the total carbon sink in the GCR (right)

On the other end of the spectrum, Rand West City had the lowest average green carbon per hectare (191.07 T/ha/ha). This is partly a reflection of the the impacts of human activity; Rand West municipality’s landscape is highly transformed by mining and industrial activities. It is also a reflection of the kind of vegetation that occurs naturally in the municipality, namely grassland. This should not be taken to mean that grassland is not important; this is the natural biome of the region and it does capture carbon, albeit at lower volumes than in forests.

Many highly urbanized areas have high average quantities of carbon per hectare because there are large numbers of planted big trees within suburban areas. For example, the City of Johannesburg has an average of 230.78 T/ha/ha stored green carbon even though it has the highest density of urban land use and infrastructure within the GCR.

Figure 3 provides a more detailed picture of the broader trends described in Figure 2 by presenting the composition of green carbon in each municipality. The City of Johannesburg yielded the highest percentages of both the closed canopy and tall trees/high shrub density classes (purple and dark blue colours) which, as noted above, is a result of the tall tree lined streets and gardens of the northern suburbs. Johannesburg also has the lowest percentages of grass, small tree/sparse shrub and medium tree/shrub density classes (beige and light green colours) which would in fact have been more typical of the highveld before human settlement. This observation could also be due to the limited number of available open spaces in the City of Johannesburg. Similar percentages of the two classes were noticed in the larger municipalities of City of Tshwane and Ekurhuleni. The large percentages of the two tall tree classes (purple and dark blue colours) was also noticed in Mogale City due to the presence of the indigenous Afromontane forests in the Western Magaliesberg region (P). 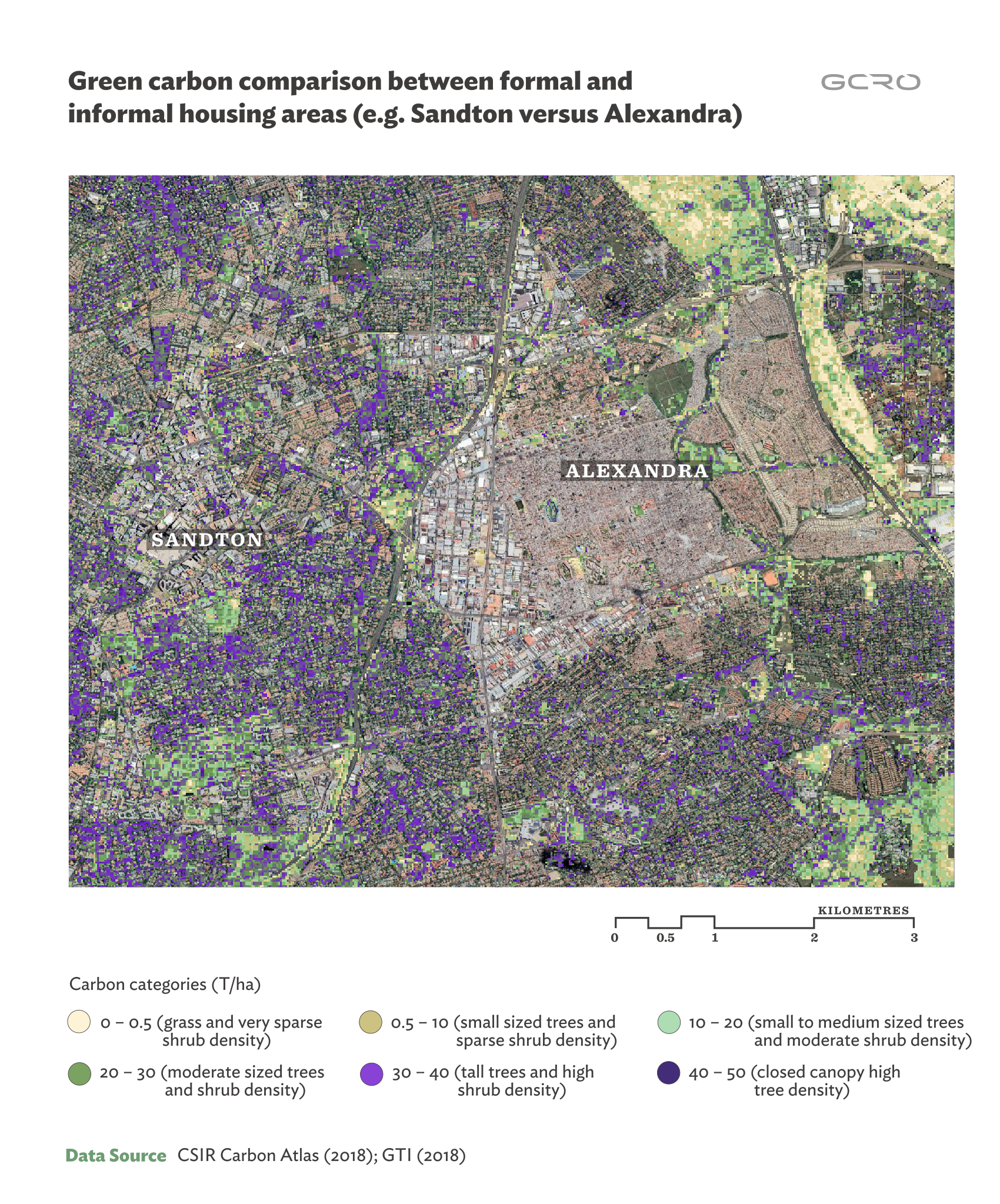 The May 2017 Map of the Month showed how the distribution of green areas in Gauteng reflects the inequalities in South African society and this map of green carbon supports a similar picture. Figure 4 confirms that Sandton possesses large quantities and high densities of green carbon that is distributed amongst gardens, parks, tree lined streets and golf courses. In comparison, there are minimal levels of green carbon present in Alexandra where there are very few green areas and parks. Built up surfaces with hardened and eroded substrates typical of many of the low rise high density areas in our settlements make the greening of these very difficult. Given the pressing need for formalised housing and service provision in well located areas, the bigger question to be asked is whether ‘greening’ can be extended beyond relatively privileged areas to those settlements occupied by low income earners. A community’s carbon offsets do not have to be in the same neighbourhood or municipality but should be viewed in the context of the bigger picture of the GCR’s desired total carbon sink storage and its possible placement to combat climate change. The use of land in townships, informal settlements and integrated human settlements might be said to be ‘efficient’ in that it concentrates people together leaving other land areas un-urbanised. Nevertheless as various GCRO studies on green infrastructure show, the absence of greening in the urban environment exacerbates the intensity of floods and urban heat (Culwick-Fatti et al., 2019). Therefore in addition to considerations of overall balance between carbon sources and carbon sinks across the whole city region, there is much to be gained from greening of urban areas at the local scale (See GCRO's Green Assets and Infrastructure page).

A key question with respect to green carbon, is how to preserve and grow green carbon sinks within a province that is under constant development pressures while not infringing on the quality of life of people and ecological infrastructure. The end goal would be to ascertain quantitatively whether the GCR can reach an overall carbon neutral or negative status (i.e. climate positive) which would help mitigate further climate changes. The total carbon sink storage required to meet this task is not currently known for the GCR. This research is part of a new project at the GCRO which will focus on quantifying the different types of carbon (e.g. green, teal, blue, black and brown carbon described in Zinke, 2020) and will be visualised within a detailed carbon atlas for the GCR.

The green carbon map was created based on the approach outlined in (Naidoo et al., 2015, 2016) which estimated vegetative above ground biomass (AGB) by upscaling ground measured AGB to airborne Light Detection and Ranging (LiDAR) data, and then space-borne Synthetic Aperture Radar (SAR) data (ALOS PALSAR-2 L-Band). An optical vegetation index, derived from the Sentinel-2 satellite sensor, called Red Edge Normalised Difference Vegetation Index (RENDVI) was integrated with the space-borne SAR for added modelling improvement, reduced topographic artefacts and saturation at high AGB levels. The core field and LiDAR datasets were collected over a variety of biomes across South Africa in 2018 such as the Savannah, Grassland, Thicket and Fynbos biomes in order to create a representative and robust South African specific AGB estimation model. The modelling was performed in a Random Forest machine learning environment which was developed using default parameterisation settings (Liaw and Wiener, 2002) and a 35%/65% dataset split for model training and validation. The documented validation accuracies for this product was R² = 0.74 and RMSE = 12.17t/ha. As a final step, the predicted vegetative AGB product was converted to carbon using the standard formula of:

Carbon Atlas for the Gauteng City-Region