The Witwatersrand gold mining belt traverses the middle of the Gauteng province from east to west. It was one of the first large-scale mining areas in South Africa and, with over a century of extraction of gold and other commodities, it has grown to be one of the biggest – although today large parts are mined out and abandoned. The contribution of this mining has been considerable. It has catalysed a host of supporting industries and infrastructure development across the country, benefitted the state through enormous tax revenues, and provided countless jobs (Cowey, 1994). However, it has also had negative effects. The needs of the mining industry for cheap labour intersected with a set of political beliefs in support of apartheid, resulting in a legacy of acute race-, space- and class-based inequalities still carried today. Decades of externalising the environmental costs of mining have also left scars on the landscape in the form of unrehabilitated mine dumps, sterilised land and polluted groundwater. These negative impacts raise the issue of the spatial relationship between mining areas and human settlements in the GCR, and how this has changed over time.

This map of the month presents two remarkable comparisons showing the coincidental expansion of both the built environment and mining activity over half a century. First, it provides a never before seen overlay of residential land cover in 1956 and 2013. The 2013 residential land cover data, light grey in the map, is a rendering of current 30 metre resolution satellite imagery from GeoTerraImage (GTI). The 1956 picture, dark grey in the map, was digitised from high resolution scans of a map in a 1957 ‘Planning Survey of the Southern Transvaal’ (Fair et al. 1957) and georeferenced to align with the more recent data on residential land cover in a GIS. Second, the map compares the expanse of mining activity in 1956, drawn from the same source, with a layer of current mining concessions in Gauteng obtained from the Department of Mineral Resources (DMR). 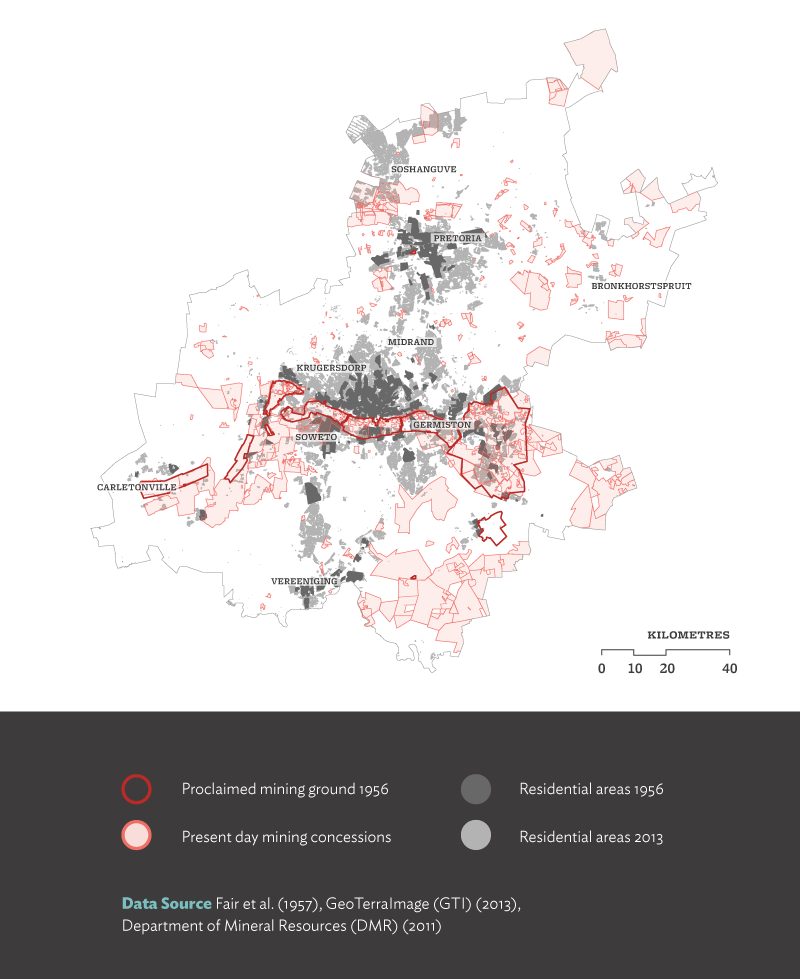 In 1956 mining related activities were limited to the proclaimed mining grounds concentrated in the central and southern parts of the region along the Witwatersrand gold mining belt. Today mining related activities are no longer limited to the central parts of the province. There are now large mining concession areas in the far south, around Heidelberg, and in the northern parts of the province (Trangos and Bobbins, 2015). This shift in pattern could be attributed to the decline of gold mining on the Witwatersrand reefs around the 1970s, as it became uneconomical to mine poorer quality ores at ever greater depths, as well as the exploitation of gold reserves and also other minerals in other parts of the region. However it does need to be recognised that small-scale and informal mining does still occur in parts of the central mining belt.

Similarly, in 1956 human settlements were located in close proximity to proclaimed mining grounds, but with very few residential areas falling on the Witwatersrand mining belt itself. Over time residential areas have radiated outwards, and by 2013 some have come to fall within actual mining grounds. This can especially be seen just east of Germiston, around Carletonville, and Johannesburg.

The introduction of residential areas on mining ground can be attributed to efforts made between 1965 and 1980, in particular under the auspices of the Mining Rights Act of 1967, to rehabilitate mining ground in close proximity to settlement areas, and the allocation of this land for the settlement of African, coloured and Indian population groups (Mubiwa and Annegarn, 2013). The expansion of residential areas around Soweto and south Germiston were a legacy of this policy implemented during the height of apartheid (Kilian et al., 2005). However there has also been a continued expansion of residential areas onto mining ground in more recent years, for example through efforts to re-compact the city by bridging the north-south divide left by the mining belt. Many of these new areas are not yet well integrated into the urban fabric and are characterised by substandard infrastructure and poor service delivery (Winde and Stoch, 2010).

This map indicates how human settlement patterns relate in complex ways to their physical environment over time. In some areas there has been little mining activity and unconstrained expansion of residential areas; in others there has been continued mining activity and very little residential development. This pattern is to be expected given the environmental and human health challenges presented by mining to adjacent areas where people live. However the relationship between mining and land use patterns is not always this simple. There have also been new residential areas spawned by the opening up of mining concessions, and the deliberate settlement of people on or next to mining ground to promote either segregation or, more recently, integration. From different perspectives then the city-region – and especially the mining frontier along the Witwatersrand – presents a fascinating case of residential land use being profoundly shaped by historical mining activities.

Look out for GCRO's Research Report, Mining Landscapes in the GCR, forthcoming in November 2016.

Notes on the interpretation of the map:

Cowey, A. (1994) ‘Mining and Metallurgy in South Africa - A Practical History’. MINTEK

Department of Planning and the Environment (DPE) (1974) 'Proposals for a Guide Plan for the Pretoria/Witwatersrand/Vereeniging (PWV) Complex'. Pretoria