Area cartograms depict non-absolute space where the extent of a feature area is proportional to a measured value. In this map, the ESRI ArcGIS Cartogram Geoprocessing Tool (version 2), available from http://arcscripts.esri.com/details.asp?dbid=15638, was used to map Stats SA Census 2011 population data. The maps depict the total population per province in South Africa and per municipality in Gauteng. The actual areas of the provincial and municipal features are either under or over represented based on the total population but have retained a partially accurate relative location. The maps therefore depict interesting proportional and relative spatial differences in population data and do not reflect the geographic area of the administration boundary.

The South Africa cartogram depicts a striking relationship that exists between the area and population of the Northern Cape and Gauteng provinces, which have the largest and smallest administrative area per province, and the smallest and largest recorded population per province respectively. Gauteng can therefore be considered the beating heart of South Africa, as although it is the smallest province by administrative area, it supports the largest provincial population of 12 272 263. The Gauteng municipal area cartogram depicts the three metropolitan municipalities with the highest population in Johannesburg 4 434 830, almost a third of Gauteng's total population. The Johannesburg and Ekurhuleni metropolitan municipalities resemble the ventricles of a human heart – whose primary function is to act as the engine room of the body – just as the two metropolitan municipalities have been referred to as being the commercial and industrial engine rooms of South Africa. 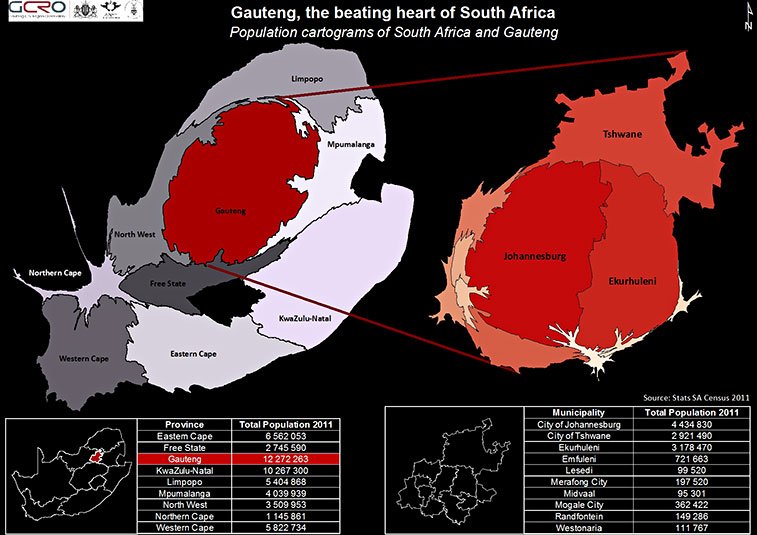