This month’s map of the month has been informed by GCRO’s previous map on the location of planned mega-housing projects published in May 2015. This is due to interest in the planned mega-housing projects and a call from the Gauteng Department of Agricultural and Rural Development (GDARD) to explore these developments in terms of the newly released Gauteng Provincial Environmental Management Framework (GPEMF). This month therefore sees the completion of the first joint map of the month between GCRO (Kerry Bobbins) and GDARD (Simon Mafu, Marc Leroy and Rina Taviv).

The map combines three digital spatial datasets namely; GTI 10m land cover, depicting all urban land classes in 2009 (in dark grey); GDARD GPEMF zones 1, 2 and 3 (light grey and green); and GCRO’s interpretation of the approximate location of the planned mega housing project developments (in red). The planned mega-housing projects have been generally located using sites identified by the Premier of Gauteng in his February 2015 State of the Province Address (SOPA).

The GPEMF was developed to guide, and significantly reduce, regulatory requirements for development in the Gauteng province. Gazetted in May 2015, the purpose of this tool, which aligns with the Gauteng Growth and Management Perspective (2014), is to significantly reduce the red tape associated with environmental authorisations for development and the cost of conducting business in the province.

Derived by defining desired state, environmental sensitivity and unique control areas, the GPEMF identifies five Environmental Management Zones (EMZ), which are explained in more detail in the GPEMF report available on the GDARD website (gdard.gpg.gov.za). The purpose of these zones is to inform the appropriate location for development in the province, while protecting and conserving the natural environment. In addition to the EMZs, a further six Special Management Areas are identified by the GPEMF. Each of these management areas has specific development objectives that warrant a particular management approach. Examples of these areas include the Cradle of Humankind World Heritage Site and Dinokeng.

The map indicates that the Urban Development Zone (Zone 1) identified by the GPEMF covers a much larger extent than the existing built up areas of the province, shown by the existing urban land cover layer. The map also depicts that the general location of the proposed mega-housing projects largely falls inside the urban development zone (zone 1), with five planned housing projects located outside of this zone – Droogeheuwel farm, Sterkwater, Syferfontein, Savanna City and Boiketlong. Identified to fall within the High Control Zones, these five housing projects overlap with sensitive environmental areas earmarked for conservation and/or protection. These areas of overlap flag a difference between the GPEMF and the planned mega-housing projects. For example, the Boiketlong area is located within a conservation priority zone in terms of the GPEMF. While the development is not compatible with the GPEMF guidelines for the zone, it does not mean that the development should not take place. This area shows how environmental decision support tools can be used to guide the development decision making process.

The intention of the next phase of the GPEMF is to utilise section 24(2)(d) of the National Environmental Management Act, (Act 107 of 1998) along with the EMZs to recommend the activities that may be excluded from a Zone and replaced by a Norm or Standard.

For more on the GPEMF and/or to acquire the data, please contact Marc Leroy (marc.leroy@gauteng.gov.za). 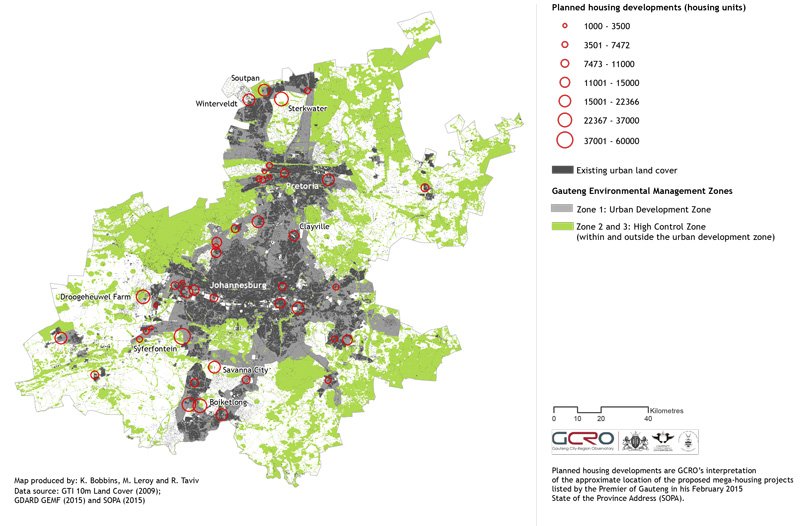