In mid-2009, the Premier’s Office in the Gauteng Provincial Government commissioned the Organisation for Economic Co-operation and Development (OECD) to undertake a Territorial Review of the Gauteng City-Region. This Territorial Review was publicly launched by the Member of the Executive Council (MEC) for Finance, Mr Mandla Nkomfe, speaking on behalf of the Premier, Ms Nomvula Mokonyane, at a formal lunch in Sandton on 30 November 2011.

While the Review was commissioned by government, it stands as an independent peer assessment of the challenges and opportunities facing the city-region, backed by an 18-month process of data-collection and comparative analysis. The comprehensive report looks at Gauteng in comparison to 90 other metropolitan regions in the OECD's MetroDatabase, giving a perspective on where Gauteng stands in relation to similar large regions on issues of population size and growth, economic development, spatial efficiency and equity, affordability, environmental sustainability, social equity, and governance. GCRO, acting under the auspices of the Premier's Office, supported the Review process throughout, in particular by arranging missions of OECD secretariat members to Gauteng, and by providing the OECD with background data and analysis in a major Background Report.

It is planned that while the Secretary General of the OECD, Mr Angel Gurria, is in South Africa for COP17, he will meet with President Jacob Zuma and five of his Ministers, and a copy of the Territorial Review will be presented to the President.

An online version of the Review can be obtained here: http://www.oecd-ilibrary.org/urban-rural-and-regional-development/oecd-territorial-reviews-the-gauteng-city-region-south-africa-2011_9789264122840-en;jsessionid=adv0mjbhji5q.epsilon 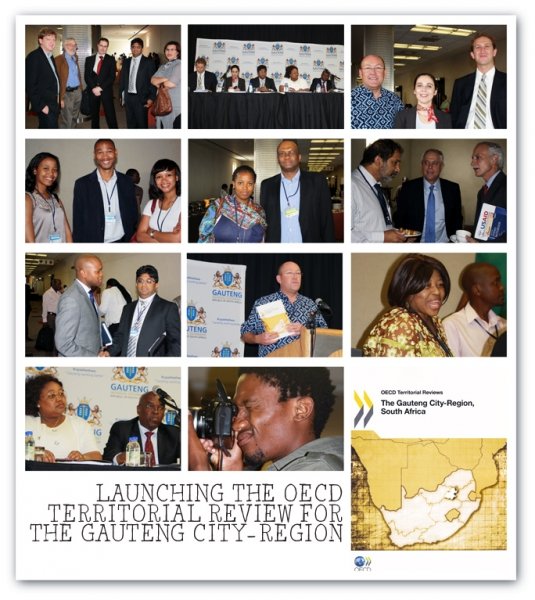